There is some great road riding to be done around Taihu, plenty of gorgeous views, newly built roads, wide shoulders, many even with bike-only lanes. Whether you’re in for a full day, two days or the full circuit, it’s something every road cyclist will enjoy, though to enjoy it best you need at least a weekend. Below is a brief introduction with options for 2-day, 3-day and week-long cycling trips. 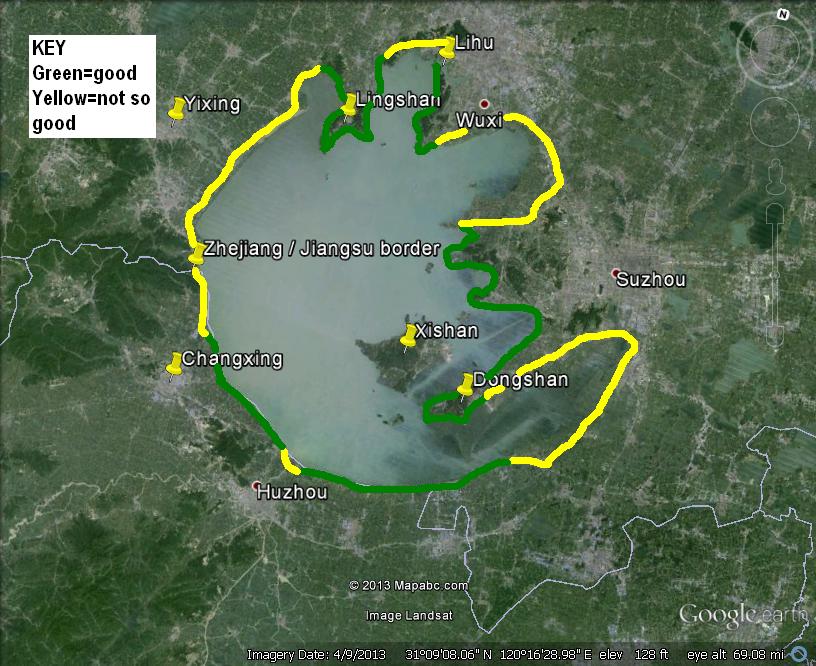 The best, most accessible trip is to throw your bike on the fast train to Suzhou in morning, jump off and take Taihu Dadao (which literally runs right past the main Suzhou train station) to the S9. At the S9 turn south and take that to Sufu Road and head toward the Guangfu Scenic Area (west toward the lake). After just a little bit you’ll hit a crossroad with Fudong Road. Take that south and it’s a straight shot to the Xishan bridge. Or cross over that and head toward Chongshandao. Either way, once you hit the shore, you’ve got many many kilometers of good road with plenty of shoulder laying south and east of you. Detour to loop Xishan or continue south to Dongshan. Note that if you want to climb Xishan for a panoramic view, you’ll have to sneak past the gate after 4pm when the guards go off duty. Before that no bikes are allowed.

My suggestion is to overnight either at the amazingly well placed but kind of creepy Soluxe Hotel on Chongshandao or somewhere on Xishan. The next day continue on to Dongshan and catch the ferry to Sanshan Dao. The last ferry to Sanshan Dao leaves at 5pm on weekends and 3pm on weekdays. The following day cycle back to Suzhou, hop the train back to Shanghai.

If you have two days…Option 1

The above still holds but you either opt for the Chongshandao/Xishan area or the Dongshan peninsula. If the weather is nice and you get an early start you should be able to make the 5pm ferry on Dongshan to get to Sanshan Dao. Even if you for some reason miss it, then there are plenty of hotels and nongjiale style Chinese B&Bs on Dongshan.

If you have two days…Option 2

The other option is to go for the south bowl of Taihu. That’s the undiscovered country there. The Taihu jump on point is just after Baipugang (百浦港). It’s 120km from Shanghai, a straight shot down the G50. If you’re a few people, organize a van to drop you off there. Once you’re there, you’ve got 80km of lakefront road to lap up. But why be in a rush? Push the first day to Huzhou’s Taihu Paradise, overnight at that weird round hotel, then kick the next day for Yixing or Wuxi, depending on your legs and the wind. There are gaotie trains which run back to Shanghai from both.

If you have a week…

Well then you’ll have to do the whole bloody thing, won’t you? Train up to Suzhou and then follow the directions above to Taihu. Note: I think going clockwise is the right way to approach a full circuit. You’re on the inside part of the road with the lake to one side with unobstructed views.

Everything is great on the lake until you hit the south side of the Dongshan peninsula, then it becomes a bit of a slog. You lose the lake, but at least the road is still quite good and not heavily trafficked. Even that changes when you it the Suzhentao Highway (also known as the S230) which is where you have to start your descent into the south bowl of the lake. That’s just cars and sweat and gnarliness for 20-25 kilometers. On Google maps it looks like there should be some smaller roads closer to the lake, but it’s all being redeveloped down there so there’s tons of dead ends and weirdness. You can finally decamp the expressway at Nandaishu and traverse to the coast and cross the river at Baipugang. From there it is all coastline until Huzhou’s Taihu Paradise, though you will be passing through a couple of small towns between there and Qidu, but after Qidu you will find the best riding of the whole lake in my opinion.

This pretty much continues (with a blip at Taihu Paradise) until the lake road runs into a dead end at Tangwan (which is where the G25 interstate comes into the picture). Here you have to detour off to the 104 National Road. This part is really not fun. You stay on that through the rest of Zhejiang, across the border to Jiangsu until you pick up the S230 again. The S230 is a bit better, but it too stays well off the lake. There is a dirt road the runs along the dike, but it is not totally connected the entire length of the lake there. It’s pretty, but you won’t make good time. Push on to the Lingshan Peninsula where things improve considerably.

The Lingshan peninsula represents a return to good riding. Good roads, great views, little traffic. If you’re wanting to do things in style, stay at the Doubletree out there. Very cool. The road is not asgood on the east side of the peninsula–narrow shoulder + more traffic, but it’s still okay. Eventually you link back up to your old friend the S230. You can take that straight into Wuxi.

After Wuxi, the Yuantouzhu peninsula (Turtlehead Peninsula) has some more fine riding–hilly, rolling stuff–until you get down to Nanquanzhen. There you are sort of stuck. I avoided the S19 expressway for Juqu Road (hey what do you know the S230 again!). Easy riding, but no scenery. As you round the bend to head south toward the Guangfu area the roads get all confused around the Jinghang canal bridge. This was probably the worst spot of all on the lake. Stay on the 230 until Sufu Road which is where you turn off for Guangfu/Chongshandao and the lake. It’s a gnarly stretch of riding, but hey, a bad riding beats a good day working, right?

From there you can follow directions from above or you can head to Suzhou and back to Shanghai.

If you have any specific questions, you can contact me at leeallenmack@gmail.com

2 thoughts on “Taihu: For Cyclists”