Five and a half years ago I made my first trip to Taihu. I wrote about it on City Weekend. That’s around the time I started reading Chinese language guidebooks so I could get off the beaten path a bit. In my Chinese guidebook there was an entry for Guangfu Temple. So in March 2008, I decided to go find it and check out Taihu at the same time. 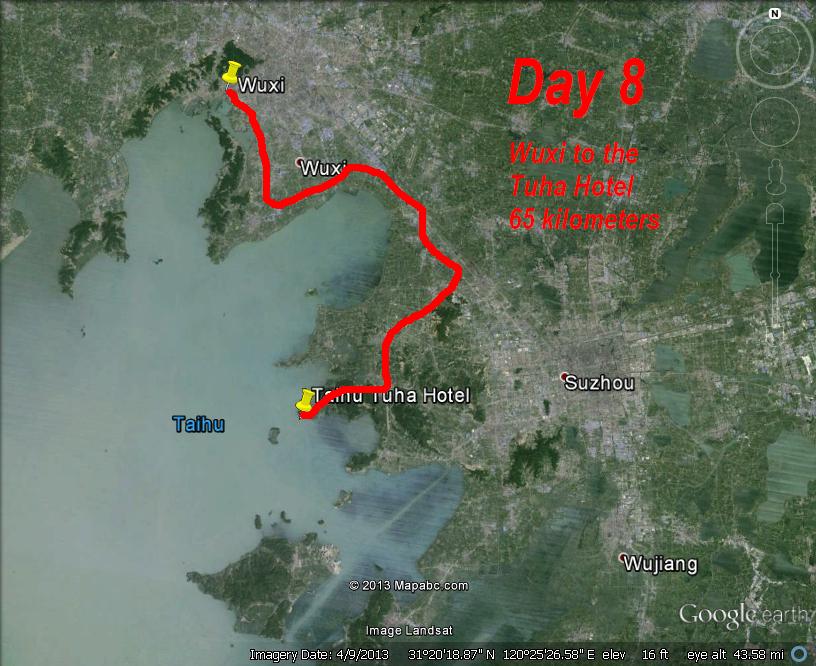 Fast forward five and a half years, me on my bike, nearing the completion of my Tour de Taihu, just over a day’s cycle from my destination, from becoming the first foreigner to complete a solo cycle around China’s third largest lake. I decided to revisit a little bit of history, to see if it was still there, and finally to stay at the Taihu Tuhua Hotel, which so captivated me five and half years ago.

The day started with rain, a steady downpour in Wuxi. Thankfully it let up enough by mid morning that I rallied the energy to saddle up and head south. It was a shit day of cycling, to be honest. I caught a flat, I was on highways most of the day, and worst of all, I didn’t even see the lake for the first 55km. That adds up to a shit day. 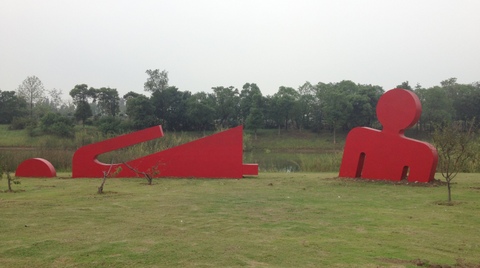 The most exciting thing I saw between Wuxi and Suzhou 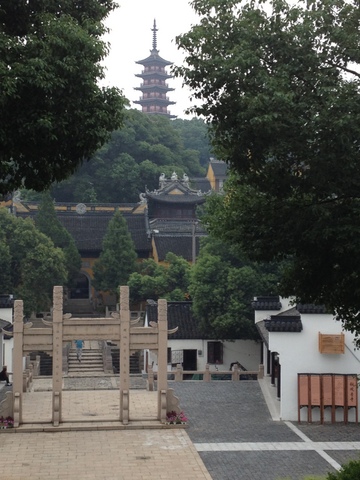 Because I lost the morning and the afternoon was getting on, I didn’t stop as planned and pay my homage to the 1,000-year-old copper Buddha inside. I pushed on deeper into the marshy peninsula. I rode and rode until finally I came upon the same Taihu Boat Street where I had my songzi guiyu five years before. It has been wrecked almost completely (photo below). I cycled on, got lost, fretted a bit and then finally found Buddha’s home. 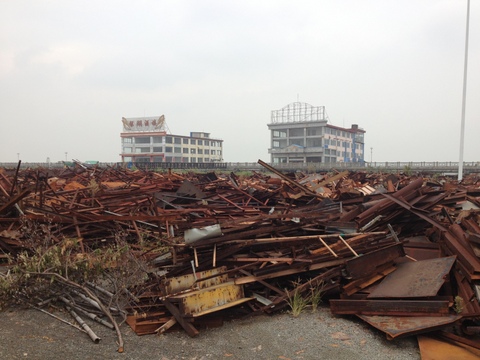 Chongshan Village looks the same as any other village, but has one major difference: the one local industry here is carving Buddha statues out of blocks of wood. The Buddha statues are all sizes, small as your hand to twice as big as a human. Every garage, every warehouse, very shop in the village is devoted to hand carving Buddhas. I cycled through and marveled at the Buddhas in varying states of completion. Some had bodies but uncarved blocks for heads. Some had half coats of paint. Very few were completely done. Amazing. Chongshan village. One thing I will never forget is the scent of freshly sawn cedar which permeates the air there. 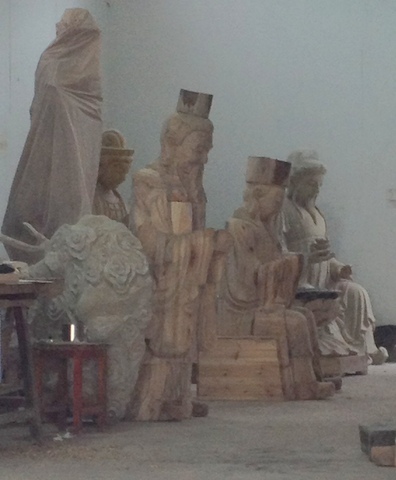 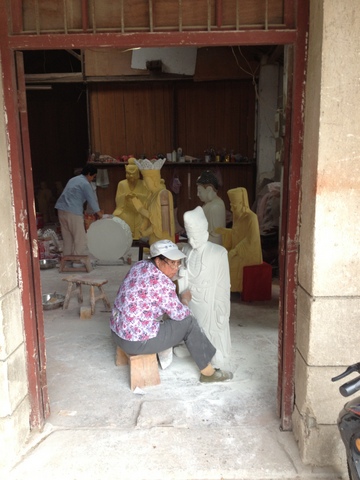 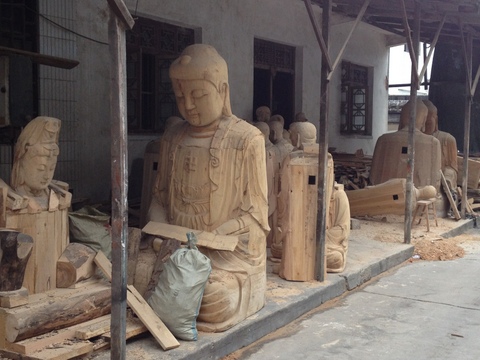 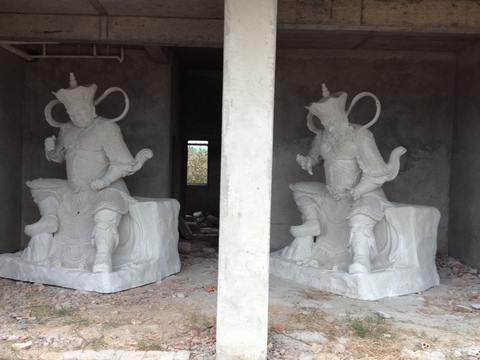 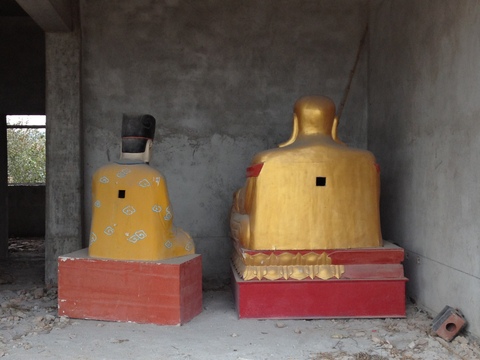 I spent some time there reacquainting myself before pressing on as the day grew steadily greyer and dimmer. Finally, after a fair bit of cycling, at the very end of a long dead-end road, I came upon it: the Taihu Tuhua Hotel. It’s still there after five years, though now it is known as the Taihu Taiyang Hotel, English name: Taihu Soluxe Hotel. It’s amazing, spread over many acres of land all bordering the lake with a green clad hill behind it. Nothing else around, no development. Lord only knows what accident of land management allowed this to happen.

The hotel’s not so lux, though. It’s gotten even more creepy and rundown and weird–it’s practically empty. I got a room with a big bed facing the lake for RMB380. It’s still got one of the best locations of any hotel I have ever seen on Taihu. Better even than the Doubletree. It’s got this expansive stone terrace with a commanding view of the lake where you could put a bunch of tables. It’s a weird, weird place and I highly recommend it.

So that was my day. A ton of foot pumping was rewarded in the end by the biking Buddha. Another great day on the road. Tomorrow we cross the finish line.

What I learned today

1. There is a village–Chongshan–which makes carved Buddhas in every shape and size.

2. Taihu Tuhua Hotel is still there and still weird.

3. Pedal and ye shall be rewarded 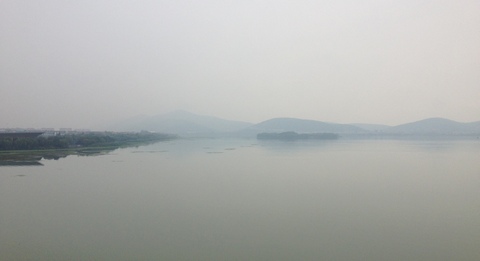 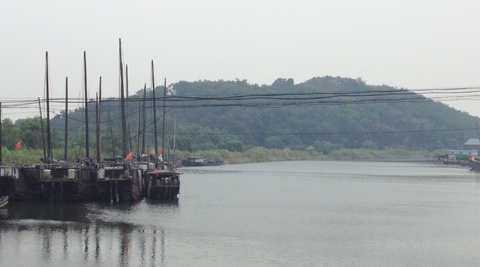 This peninsula is actually quite the fishing hub

One thought on “Tour de Taihu Day 8: Remembrance of Things Past”