I don’t want to write a travelogue of Japan, but I do want to convey what it was like to travel by bicycle through this very interesting country. So what I’ve done instead is a Mlog–a music blog–which is not a word, nor even a good idea for one. What I did was Shazam tracks all around Japan at different times, whenever I heard anything that struck me. Japan, as I wrote before, is almost always perfectly soundtracked. So here’s my journey through Japan, one track at a time. I’ve imbedded Youtube video of each track, plus linked to Xiami where I could.

The Japanese are super mod. The girls dye their hair blond and wear miniskirts. The guys have funky haircuts and deliberately mismatched clothes. When it rains, everyone carries a transparent umbrella with a white handle.

See if you can listen to “Juice Box” and not get up a groove. It’s total synth jamminess. The  organ solos woven through and the tight trumpet bleats make an infectious headbobber. And that funky tambourine line just screams 1960s.

This track was playing in Sunday Coffee in Shibuya, across the street from where we were staying. Sunday Coffee has a disco ball suspended from the ceiling, but otherwise it’s just a coffee shop, specializing in Kona and WiFi. They also sell ice cold bottles of Kona Long Board beer. Of course they do. 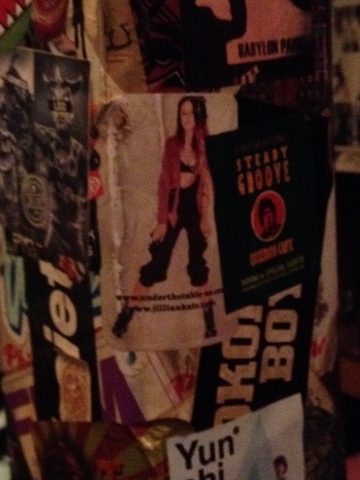 One evening, as the typhoon rains came down pelting down, I sat inside nursing a pale ale listening to Jackie Mittoo, watching the vitreous outlines of people hurrying past, jotting in my notebook. This is what I had written:

“Shibuya is so Jackie Mittoo.”

Maurice White: “I Need You”

Maurice White is the founder of Earth, Wind and Fire which means he’s probably the most soulful dude on the planet. He also had quite a good solo career. Put on this song in the general vicinity of a woman and you are making love in like 35 seconds.

So, we’re sitting in the Sansui Diner on the north shore of Yamanaka Lake for lunch one afternoon. Fuji is somewhere in the background. The diner is completely empty save for one middle aged Japanese woman who is waitress, cook and cashier. On the wall is a poster of a Japanese guy doing barefoot water skiing tricks. The poster looks like it has been there since the ’80s. It feels like we are the only customers this month.

An old fashioned ghetto blaster sits on a table tuned to a local radio station. This song comes while I wait for my food–a “combination salad” and toast. The lady brings over the food, sets it before me and repeats my order. For some reason the way she pronounces the English word “combination” sounds if it were the answer to a zen riddle.

You hear plenty of J-pop in Japan, especially in ramen shops. Somehow this makes complete sense. Most of it slides harmlessly off the ear, providing a bit of context for the very real business of slurping down a big bowl of delicious noodles paired with a plate of pan-fried dumplings and an Asahi draft which comes included in the set menu.

One afternoon in a Tokyo ramen shop chosen more or less at random this song came on. It sounded pretty cool–homage to emotionally distressed, clangy, shoegazy indie rock from the ’90s. I Shazamed it and here it is. I like it even more knowing it’s the soundtrack to the highlights of the 196th episode of Sailor Moon.

Harry Nilsson: “I Guess The Lord Must Be In New York City”

Our original plan was the cycle from Tokyo to Kyoto roughly following the Old Tokaido Road which is now Highway 1. This song we heard in a convenience store–a Lawson’s I think–somewhere on the road. It’s the perfect road song. The banjo expresses all the fun and freedom and endless opportunity of being on the bike.

On the road through the middle of Japan, polaroids chasing each other. Passing through small towns and over bridges spanning rocky rivers, waving to old lady fruit stand proprietors, stopping here and there to take photos, marveling at a surprising vista, like a clutch of houses in a valley or a shrine by the side of the road. 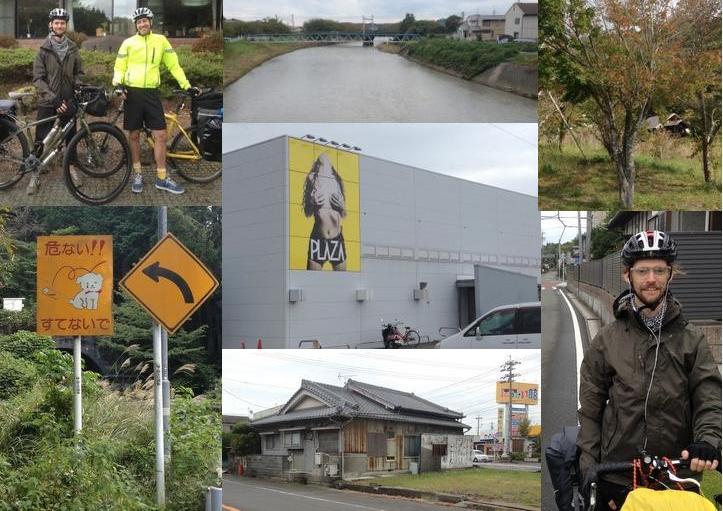 We didn’t make the entire trip on bike as planned. We were socked by two typhoons, one on either end of the trip. So, halfway through, in Hamamatsu we bagged the bikes and Shinkansened to Kyoto. Nonetheless we were able to see parts of Japan few other tourists see–the coastal heartland. Not the most gorgeous terrain in the world–in fact at times it felt like a strip mall had mated with an auto lot–but cool nonetheless. The lord must live somewhere down in there too.

A dozen kilometers past Hamamatsu is a very large estuary crossed by a narrow isthmus. Over this isthmus runs the Shinkansen line alongside a road for cars and cyclists. On the south side facing toward the Pacific Ocean there is a strip of what were once probably pretty happening resorts. They’ve kind of gone to seed a bit, but in a Japanese way which means they’ve gotten less expensive and become kitschy. We booked into one which had an onsen on the 7th floor. From it we could see the surf crashing big on the deserted beach. 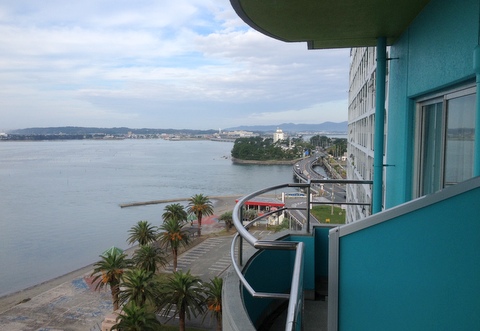 Tiki torches burned by the entrance in back and by the pool out front. The soundtrack was, of course, Puerto Rican salsa music. At first I thought this was an outlier, but after a meal and a soak in the onsen, it made complete sense.

On the strip of kitschy resorts there is a bar–The Cat’s Meow–and it is the most rockabilly bar you’ll find between Tokyo and Kyoto. This is what I wrote in my notebook about it:

“The Cat’s Meow is a decaying rockabilly bar in the next resort over. A poster advertising a show by the Connie Cat Band hangs on the wall outside. Walk in, total Tarantino place. Stage in the corner, empty for months at a time, just a drum set. One table occupied–some local middle aged hipsters with pomaded hair chain smoking cigarettes. Billows of cigarette smoke hit me when I walk in. The bartender girl goes big-eyed when she sees me. Somehow she manages to communicate to me that it’s 2,000 yen for one hour of open bar. I throw down two bills.”

While drinking my hour away, I Shazamed this song, by the king of rockabilly himself doing a ripping duet with his sister.

Louis Van Dijk Trio: “Got To get You Into My Life”

Kyoto is a cool, magical place. When you’re there, it’s obvious and clear, when you’re not, it’s hard to explain. Kyoto, quite simply, is in its own time zone. It’s one of the best places to look for the small details which make Japan such a special country.

For example, after a morning at the Kiyomizu Temple, we had lunch at a small cafe down a side street away from the tourist bustle. It was very small cafe divided equally into a sit-down Western section and a kneel-down, remove-shoes, tatami-floored Japanese section. In the corner of the Japanese section sat an old geisha in full garb, wig removed and smoking a cigarette. For a minute I thought it was a drag queen. To my left on the window sill was a small embroidered pillow and on the pillow was a lifelike doll of a sleeping kitten. Other such inexpensive but fascinating knickknacks were spread around. The owner’s daughter served me the best British style milk tea I’ve ever had. 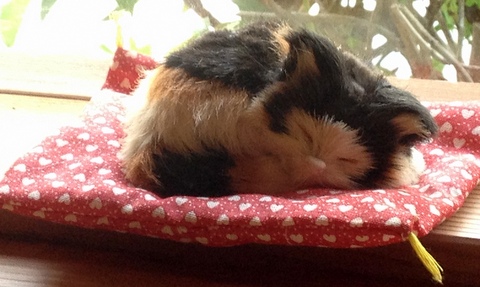 I Shazamed this song–a beautiful piece of light jazz just perfect for milk tea and quiet Kyoto moments with the notebook.

Some people describe Kyoto as a living museum and that’s pretty accurate so long as you emphasize the “living” part. It’s not a perfect place, nor is it meant to be. It has a comfortable, lived-in feel. People take their daily runs by the Kamogawa river and at night teenagers gather there to do teenager stuff. One performance artist had set up a ghetto blaster blasting rave music while he juggled fire. A full band performed not far away. People–not just tourists–walk around in traditional dress to do their daily shopping.It’s a funky, fun place. 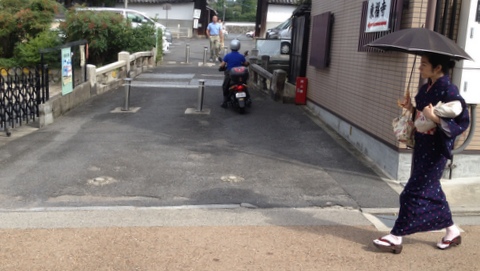 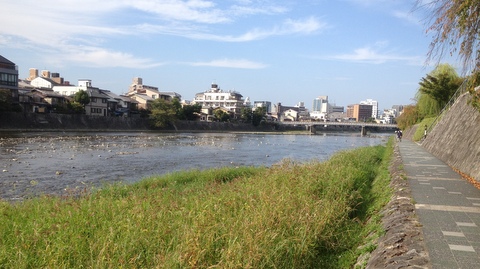 The Imperial Palace, in the center of town, is surrounded by a large park consisting of graveled expanses and landscaped greens topped with grass and large old trees. Knots of people sat underneath the trees. A thin visible path had been worn in the gravel by years of cyclists taking the same route skirting the gates of the Imperial Palace which seem to be perpetually shut.

We stayed in hotels around the Kyoto Station area. Not the most exciting choice, but Kyoto’s not big so it worked out fine. And Kyoto Station, which is where the Shinkansen stops, turned out to be pretty awesome. Inside is a huge atrium and inside this atrium is a massive flight of stairs which leads to a rooftop garden. These stairs have installed lights which morph into and out of quirky moving displays and fun messages–”Happy Halloween” with a full moon cris-crossed by a witch on a broomstick.

But even more amazing was the Aqua Fantasy display which combined neon-lighted jets of water choreographed to pop music. People were delighted. Some even clapped after it concluded. It felt like a Pop Art version of those synchronized swimming numbers from 1940s musicals. I Shazamed one of the tracks. Ah, Kyoto.

So what about Japan? Japan is awesome. Japan is incredible. The entire country smells like freshly chopped wood, cedar I think. The colors are so clear it makes you dizzy. It’s the kind of place where you just want to take photos of empty sidewalks. To state the obvious, Japan is everything that China is not, though somehow you know that they are twins separated at birth. For someone like myself who has spent 16 years in China, a trip through Japan is a sentimental education. 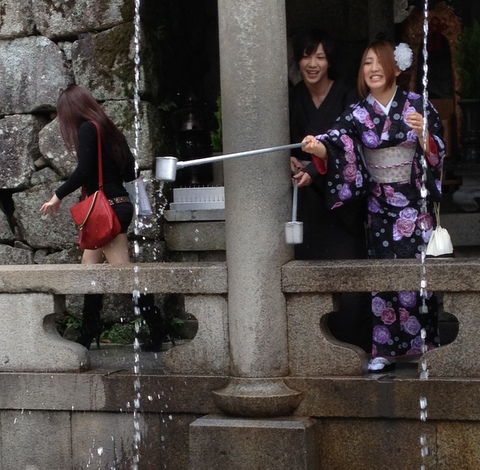 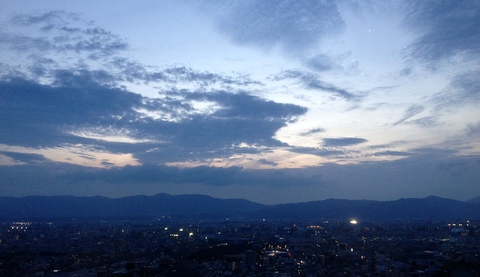 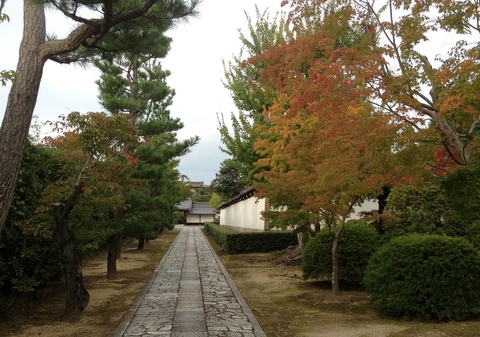 So when I heard this piano version of Edward Elgar’s Salut d’Amour towards the end of the trip–I don’t remember exactly where–it summed things up, placing the now somewhere between nostalgia and knowing wink. Sitting in Narita, on my way back home, I pick up the polaroids that are scattered around me. I look at them one by one. This is what I hear.