2015 marked the 6th INTRO electronic music festival and this year was easily the worst of the bunch–a big step back. It wasn’t so much a music festival as an excuse for selfies. It left me wet and puzzled and wondering where has China’s most important EDM festival actually gone in the last 7 years? Let’s hit the rewind button. 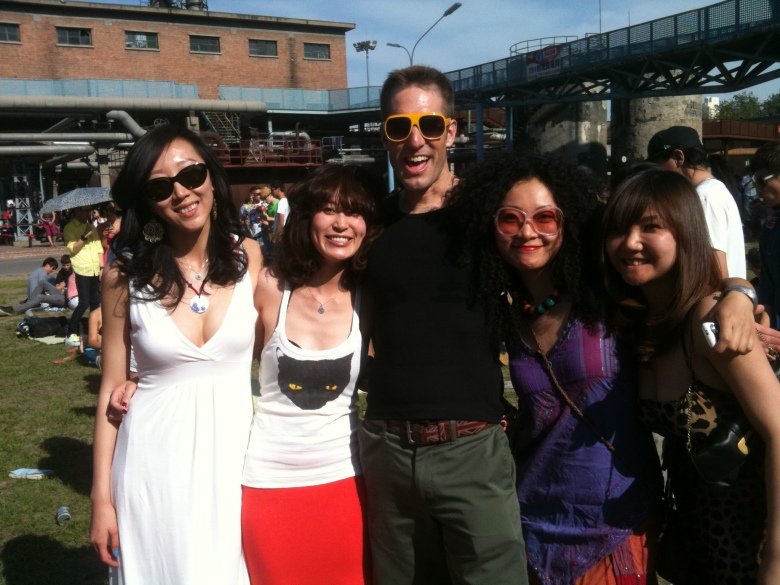 The first INTRO went down in 2009. Coming off the Olympic year, everyone had big ideas. There was a mood to open up and go international. Maybe because the world economy was so shaky while China’s just kept motoring. So when, in the spring of 2009, I was approached by Acupuncture promoter Miao Wong telling me they had something really big in the works for May–a proper, outdoor, EDM festival–I wasn’t too surprised.

At that time, Acupuncture had really only been throwing big parties for less than 2 years. They were more known for fun, pop up parties in odd places and of course their religious devotion to minimal tech. Their audience was mainly Chinese, which differentiated them from the Yen parties which were then the gold standard.

She showed me an impressive deck outlining a festival to be held in D-Park, a creepy abandoned industrial area just behind the 798 Art District. I was running City Weekend at the time and we got on board as media partners. Here’s a pretty funny video advertising that first festival.

INTRO is an acronym and stands for Ideas Need To Reach Out. It’s a bad name, to be sure, but that’s the kind of vanilla flavored cheese you need to spread on anything fun in Beijing to get the authorities to bite. It was to be some sort of East meets West cultural mixing platform. In the minds of the muppets at the Ministry of Culture, it was probably the techno remix of the Wong Fei hung theme song which–if you’re wondering–is this. It was also rumored that one of the Acupuncture crew had good guanxi with someone high up in the MoC. I think Das Auto ended up funding the entire thing through the Goethe Institute. There was plenty of grumbling from the other local DJ crews because, on the most high profile international stage Chinese EDM had ever erected, it was for sure going to be Acupuncture DJs in the spotlight.

Despite the considerable obstacles, INTRO went down on May 23, 2009, under brilliant blue skies and against a stunning backdrop of giant storage containers, brick smokestacks, multi-tiered terraces connected with metal ladders, warehouses, large cylinders, huge curved rust-colored steam pipes, and a web of mesh and metal scaffolding framing the DJ platform. They put a wooden floor over the grass infield for dancing, but left plenty of  grass exposed to make it feel earthy. The beats boomed from a top-tier sound system as the sun sank and then the lights came on and 8,000 people got crazy.

The whole thing is memorialized here in a full 77-minute documentary. The documentary is hilarious by the way for the same reason that documentaries of ’60s music festivals are hilarious–weirdly immortal fashion choices and terrible dancing. It’s also got a nice soundtrack.

Just as impressive as the location and set-up was the DJ lineup. For an outfit that really had only just picked up steam, they pulled a HUGE line-up crowned by international heavyweights like Chris Liebing, one half of MANDY, and the Italoboyz.

It was a great day–one of the best parties I went to in my 9 years clubbing in Beijing, even though I didn’t get to see the end of it because of a strange occurrence. I went to the show with a girl named Tingting, a presenter on CRI. When we got there we met up with another friend–LL–and we all sort of danced together. At some point TT and I went for a bite to eat and when we came back LL was nowhere to be found. We asked around and finally ascertained that she had passed out and been taken away in an ambulance to a nearby hospital.

We rushed over and found her there in a room–very much alive but curled up in a fetal position. Her mom was there looking after her and another friend JJ and some Danish guy who had both been at INTRO. In the end LL was fine, just embarrassed, and we missed the rest of the show. Afterwards JJ and LL and I became good friends. INTRO thus became immortalized in my own Beijing story.

The next year INTRO returned to the same location, adding a stage and more DJs. The crowd was even bigger. That year no one passed out but a foreigner climbed 2/3 of the way up one of the smokestacks high above the crowd and pumped his fist a bit before climbing back down. Probably no one thought much about it, but it was a turning point. The next year the troubles began.

2011 was supposed to see the festival split over 2 days for an entire weekend of insanity and moved out to spacious Tongzhou Canal Park where Strawberry Festival had been taking place. They could easily quadruple attendance out there. But numerous concerns were voiced about this. For one thing it was all grass–grass that quickly was trampled into dust which was kicked up in great clouds whenever Strawberry put on a dance stage. Then there was the general lack of booze available at Strawberry which put everybody in a generally bad mood. In the end, for better or worse, Tongzhou fell apart and the whole thing was moved back to the original location out at 798–saved at the last minute!–and again it was great.

The following year, though, 48 hours before the event, it was moved from D-Park out to an empty, drab, paved-over Crab Island, a half-forgotten water park near the Beijing airport. There was no booze and the main stage was a yawn. The only salvation was the arrival of the Syndicate in a huge way. Their stage was immense and blew away the main stage. See for yourself right here.

For Acupuncture it was an organizational miracle that they got it done at all. It wasn’t the same, but everyone assumed it was a bump in the road.

2013 bolstered that case when the crew secured the best location ever–the old abandoned grounds of the Capital Steelworks west of Beijing in Mentougou. Four booming stages and no one had a bad word to say about it–total steampunk badassness. There’s video of it here.

But that was the high water mark because afterwards everything came off the rails. 2014 was straight up cancelled and then this year the thing got pinballed around finally landing somewhere just across the Beijing-Hebei border. The crowd was sparse, the music was bland and even the Syndicate stage couldn’t hold interest. It rained and of course that never helps. But still there were more people filming themselves than dancing. Proof and more proof. Hey and guess what? I just haven’t had time to edit my footage together yet.

Look back at that 2009 video. The vibe is totally different. There is a lot hope. Hope for something big. A revolution of some kind. So where has INTRO gone in 7 years? It’s gone to Hebei.

I had dinner with Miao Wong the day after INTRO 2015. All she could say was: “We survived.”

Fact is, the fate of INTRO is in the hands of Weng Weng, Acupuncture boss, Lantern Club owner. He’s an old-school promoter who traces back a long way. I heard a rumor that he was offered a 7 figures (RMB) to hand off the brand rights to another organizer and that he turned them down. I can only assume he knows what he’s doing. But without a venue, you can’t get sponsors and without sponsors you can’t get the money to bring in good DJs. It amazes me to think that the 2009 DJ lineup was significantly better than 2015′s. Only one legit international DJ this year.

I’ll still go to INTRO no matter where it’s held. I’ve got too many memories wrapped up in it. But I think it needs to be said: it’s becoming a sideshow for nostalgic clubbers who’ve grown up and moved on.