Saturday, May 16 marked the 10th Moganshan Triathlon, and probably its last–at least in its current form. “Sometimes you just know when it’s time to move on,” event founder Tori Widdowson told me at the post-race barbecue. The first year there were only a dozen participants. This year there were 40 in the individual Olympic distance category alone. Another 25 filled out the sprint distance along with 12 relay teams. Together, almost 100 people participated, mainly foreigners, and a few Chinese as well. People came from as far away as Beijing to take part. Brands like Osprey, Specialized and HUUB donated prizes. It’s seen admirable growth in a few short years, so why is it ending? 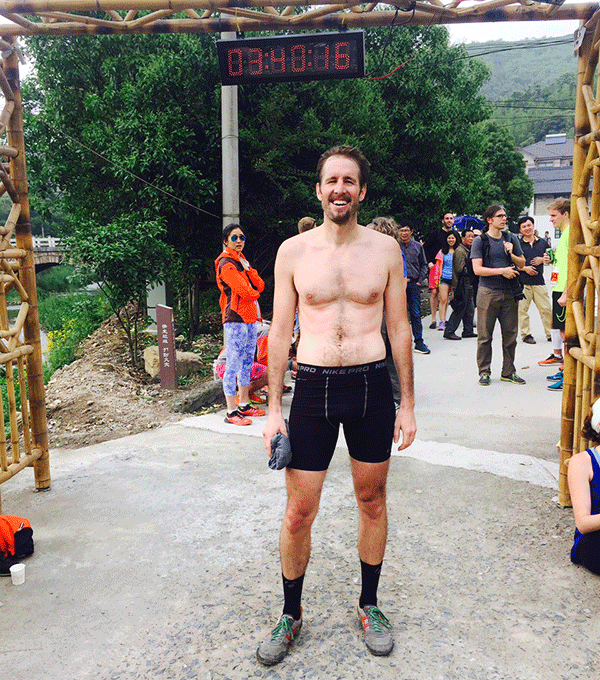 My guess the main reason is because Widdowson hit the China wall. Before, the Moganshan Tri was small enough not to draw too much attention. Now it’s big enough to raise the interest of bigger players. Fact is, there is huge, pent up demand in China for these types of organized amateur competitions. The Shanghai Marathon was booked out on a few hours. The Shanghai Triathlon, which also went down on the same weekend as the Moganshan Tri (a vexing point Widdowson thinks may not be a total coincidence), booked up within a day.

These other two events are “official” in that they have formal government backing. Quite simply, that means you can scale the operation. You have certain guarantees that the thing will go down as planned which means you can get sponsors and dough and roll that into operations or marketing. You don’t get unforeseen delays like the one we got in Moganshan where this year the start was pushed back two hours because the bus carrying some participants over was deemed too big and not allowed on the road connecting the base in Houwu to the reservoir in Anji. Stuff like that wouldn’t happen if the local bigs were fully behind it.

That’s not to say the Moganshan Tri doesn’t have any level of official support–it clearly does. There were cops and cop cars at strategic intersections managing traffic. These were probably off-duty cops making some extra grit on the side, but it still indicates a wink-wink nudge-nudge relationship with the local authorities.

And even if the Ministry of Tourism did decide to take an active role in the Moganshan Tri, the whole thing would be twisted out of recognition. There would be loud speaker speeches at the start from local blowhards talking up “发展” and “国际友谊” and “体育生活.” The silence of the reservoir, the stillness of the bamboo-clad hills and the quivering nerves of the participants would be shattered into a million pieces. That would be the price demanded for support. Of course the event would also be bigger and more Chinese. That’s natural and unavoidable. It can never be any other way–you can’t get government support for a purely laowai event which would retain the easy amiability so often lacking in Chinese “official” amateur athletics.

Another reason why this will be the last Moganshan Triathlon is due to the rapidly changing nature of Moganshan itself. I’m not talking about the top of the mountain where you’ll find The Lodge and all the 洋房. That’s not where the change is happening (the top of Moganshan is managed by Hangzhou government as an important military base). I’m talking about Houwu and the entire flank of the mountain which belongs to Deqing and runs all the way to the Anji border. Five years ago when I first starting going down there regularly, there was hardly any tourism. Now there is a parking lot for large buses. Many locals have converted their homes into nongjiale, adding the requisite terrace and hanging a sign outside. There are even a couple of bars there now–one with a pool table. People are coming in ever greater numbers and bigger commercial players are making moves.

These moves, unfortunately, also consist of “buying” the rights to Moganshan’s many reservoirs, jade green and filled with luscious, healthful water. Used to be after a day of mountain biking we would stop at one, strip down and jump in to cool off. One day a couple years ago we had a bad experience at our old reservoir and were basically screamed off by an old illiterate crone. This has become the new normal down there. The consequence is that the swim portion of the tri has bounced from reservoir to reservoir as they get bought up and fenced off from public use. “It’s just too difficult,” Widdowson confided.

She predicts a commercial player–maybe one of the larger hotels which are now opening–will move in and organize something–possibly a marathon. “They probably will ask me to bring in foreigners,” she continues, “but it’ll be my reputation on the line.” The implication is clear–she worries that the local people just won’t understand the spirit of the event well enough to make it a quality event.

And this is where the story of the Moganshan Tri merges into that of its organizer–Tori Widdowson. I’ve know her since 2007 when she was running ops for Split Works. I first met her at the Sonic Youth show in Beijing. Later on she was part of the opening team at naked Retreats, but she left after a serious difference of opinion with the management. But she stayed on in Moganshan and has been a part-time resident of Houwu for years now. I’ve seen her many times down there. She speaks great Chinese and knows all the local gossip. In the history books she may always be overshadowed by Kitto in his perch on the mountain, but I reckon Widdowson’s impact has been more far-reaching.

She is someone who has always prioritized authenticity and sincerity of purpose. She’s a committed community-builder. She helps out people down in the village as much as possible with advice on how to do things right. After the prizes for the top finishers were doled out at the race on Saturday, one of the participants unexpectedly presented her with an award–one recognizing all the years of hard work she’s put in to make the Moganshan Tri work. It was a moment freighted with genuine emotion, witnessed by few but with profound meaning.

Like most people who believe strongly in causes, Widdowson likes things done her way. It’s not a criticism, just a statement of fact. She’s protective of her reputation. It can bring her into conflict with people. And that’s the final reason why this year’s Moganshan Triathlon will be the last–it has reached the limits of laowai. It can’t get any bigger and stay true to its founding ethos. If the government champions it–even if they brought Widdowson in to manage it–it would make a rocky marriage. This has happened frequently in China–someone comes here and builds something–their own vision–and they succeed. For awhile. Until China catches up with them.

It always does sooner or later.

6 thoughts on “The 10th (and Last) Moganshan Triathlon”