The “smell of freedom” will no longer be in the air at YY Bar after a visit from the LE a week ago Friday. It’s for real and it doesn’t look like the new policy will be changing anytime soon. That’s unfortunate. The good news is that the bar is still very much open for business and owner Kenny is still there chatting with regulars as he has done almost every night for the last 16 years at 125 Nanchang Lu. Kenny was, as usual, philosophical about things. “When I opened this bar 16 years ago, I knew this day would eventually come,” he told me last night as he sipped holiday-red rooibus tea from a tiny glass cup. 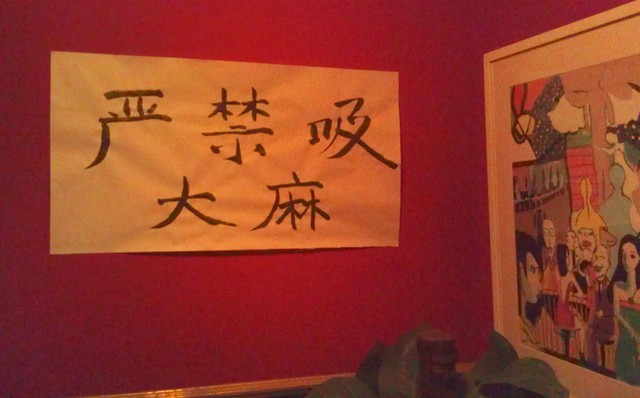 The new rules have been promulgated

Housed in an old former French Concession townhouse with interiors famously decorated with revolutionary memorabilia, YY (Yin Yang) Bar is one of the oldest bars in all of China. It is one of the most important bars in China. It was the first bar to throw real DJ parties in Shanghai. Derrick May made his China debut there. On weekends in the late 1990s there was a velvet cord and a line to get in. Later it evolved into something akin to an Amsterdam coffeehouse.

YY is a Shanghai legend and it is my favorite bar in the world. Most long-time Shanghai expats have passed through its doors and most retain deep memories of the place. Late nights, emotion and romance, hellos and goodbyes, important conversations and moments of insignificance–all etched into expat memory. I am choosing to remember the many sweet moments I spent there rather than dwell on the present certainties.

YY is inseparable from its owner, Kenny, who has been in Shanghai now for two decades (I’ll be writing a separate post about him some other time). He makes everyone feel welcome. He treats everyone like a true friend because you are a true friend. He delivers the excellent service that other bars and restaurants and hotels can only pay lip service to. Above the door hangs the famous calligraphy reading “可以谈” (meaning more or less: anything is fair game for discussion here).

On any given night of the week you might find a pair of balding French expats hunched over a game of chess or hip Chinese who’ve graduated beyond drum n bass or just random cool people. Unlike so many other bars, YY never feels “Chinese” or “laowai”. It’s a place where decorum is observed even while the senses are indulged. It’s one of the few bars where you meet new people and become friends, not fuck-buddies. It’s the best of Shanghai. It’s not some hidden gem for travel publications to prey on–it’s just a gem. It’s the closest thing I feel to what Shanghai must have been like in the ’20s and ’30s.

The Year of the Dragon has not been kind to YY, though.

First, late last year, rumors went around that the upstairs would be closing on January 1st due to landlord issues. Kenny managed to salvage the situation and it was business as usual until the shoe dropped in September and the upstairs was finally shuttered punctuated by one last blow out night to celebrate–one of my favorite YY nights when Mamahuhu Mario pulled card tricks for us after we downed rounds Champagne with a group of regulars.

The downstairs started strongly. It was a return to YY’s roots after all. But things evidently changed and the other shoe dropped. Whether it was 十八大 or a personal thing, no one knows and ultimately the reason will not be remembered in the face of the universe of memories which that  magical space engendered. Sixteen years of sleight of hand–none of us had any idea how it managed to get on in the way it did for so long.

A new chapter has been opened for YY. Please go, Shanghai. It’s the people which make a place, after all, not what you can or can’t do inside it. They have a great happy hour (6-9pm, buy one get one free). I can’t think of any place that beats YY on music on a nightly basis.