I recently moved apartments. Everyone hates moving, except me. I kind of like it. At least I like getting to know a new neighborhood, exploring it, discovering what it has to offer. And after a few months I can say that my current neighborhood is one of my all time favorites. Here’s why.

First off, I live in Pudong, and a fairly lost part at that – not Jinqiao, not Expo, not Lianyang and definitely not Lujiazui. I can see the Huangpu from my window. I’m two kilometers from Century Park which is to say – nowhere near it. I’m a block from Beiyangjing Lu metro stop – one of the dozens of nameless stops where millions of nameless Chinese people get on and off every day in the silent pursuit of their obscure lives. Basically, on first glance, it’s just another typical Chinese neighborhood.

But on second glace, other things begin to emerge. My neighborhood is basically a relic of an old water town. There’s a canal cutting along the back of my xiaoqu 小区. The water is pretty clean. Big clusters of waterlilies float on it. 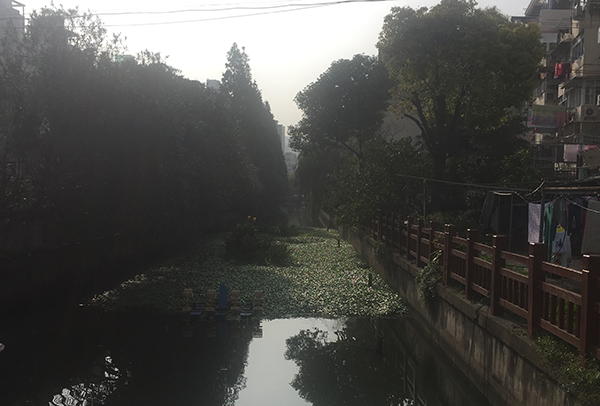 It curls around, flows underneath a street where it meets another canal in a placid confluence. Edging the confluence is a spacious open area. It’s public – you don’t need any special key or pass to access it – but no one seems to use it. There’s small benches. It’s a great place to catch the sunset and drink a beer. 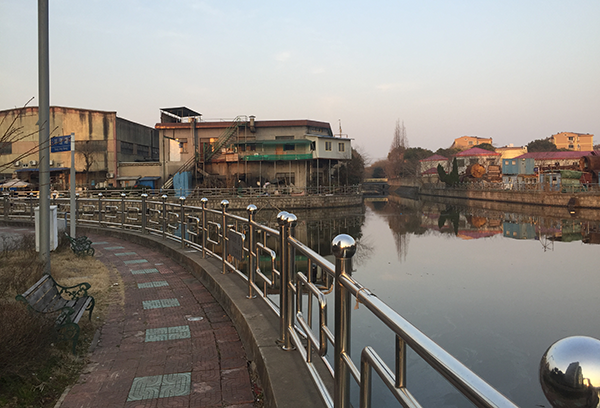 Every great Chinese neighborhood has a great caichang 菜场. Mine is two blocks away, occupies an entire hall and has everything you could ever possibly want–veggies, fruit, doufu, eggs, fish, lobsters, ducks, chickens, Shaoxing huangjiu, pickled things, nuts, meat and ambiance. A caichang is so much better than a Jingkelong or even a Carrefour. I always go to the same veggie seller. They know me. If I happen to forget money, they let me pay the next time.

A great Chinese neighborhood has great street food and this guy’s jianbing is the best. He opens at 5:30am and there’s always a line. 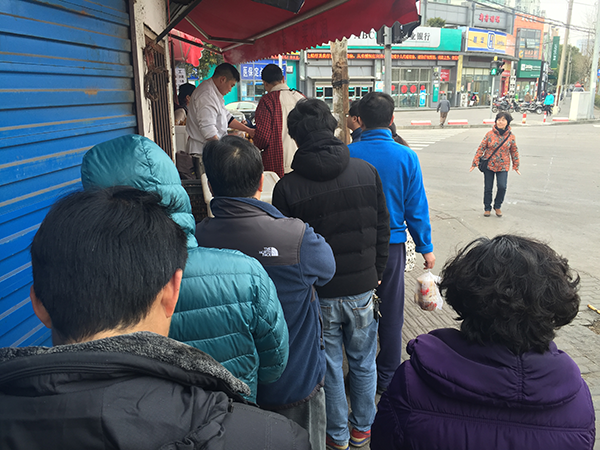 People even pull up in fancy cars to stand in line. He whips through jianbing with the intense concentration of an artist. Ladel the batter onto the grill, spread it evenly, crack an egg on top, sprinkle the seasonings, lever the edges up just as they crisp, put in the filling, fold it, cut it, bag it in the plastic–the whole process takes 35 seconds. Worth the wait.

A great Chinese neighborhood has weirdos. These are the people who add the color and flavor. There’s this one bao’an 保安 in my xiaoqu who is very friendly and possibly deranged. He knows a few words of English and bellows them out to me whenever he has the chance. “Hello!” “Morning!” “Good day!” constitute the extent of his vocabulary. But the thing is he pronounces them with amazing fluency. Whenever I speak to him in Chinese he just looks puzzled, searching through his mind to find the correct response, remaining silent if he finds that one of those three terms doesn’t quite fit. 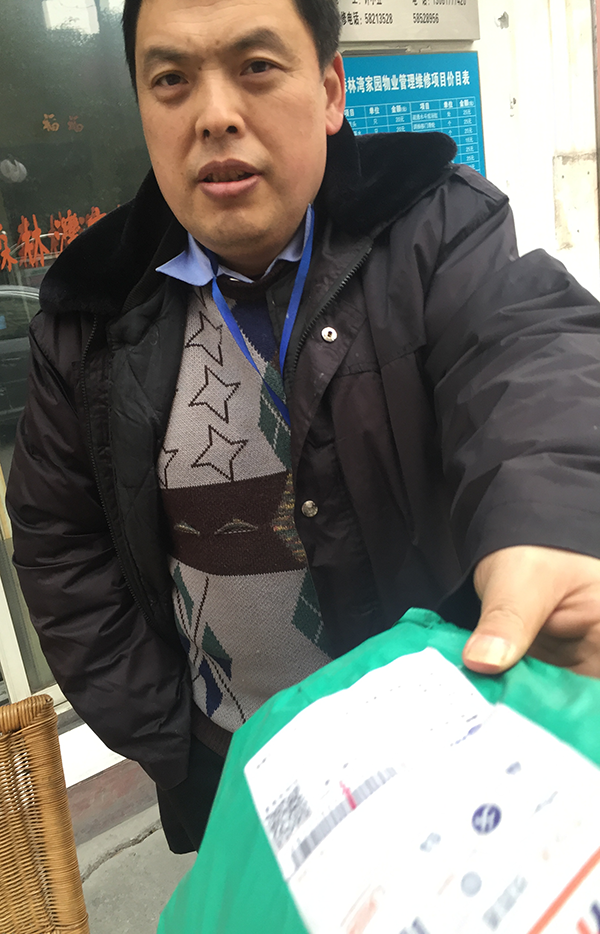 Every great Chinese neighborhood has a great neighborhood park. I can see mine from my balcony. Every morning the oldsters do their thing, forming little clusters, dancing…

If it’s not the old people then it’s the Chinese babies bundled in thick clothes their red faces peeking out like ticks ready to pop. 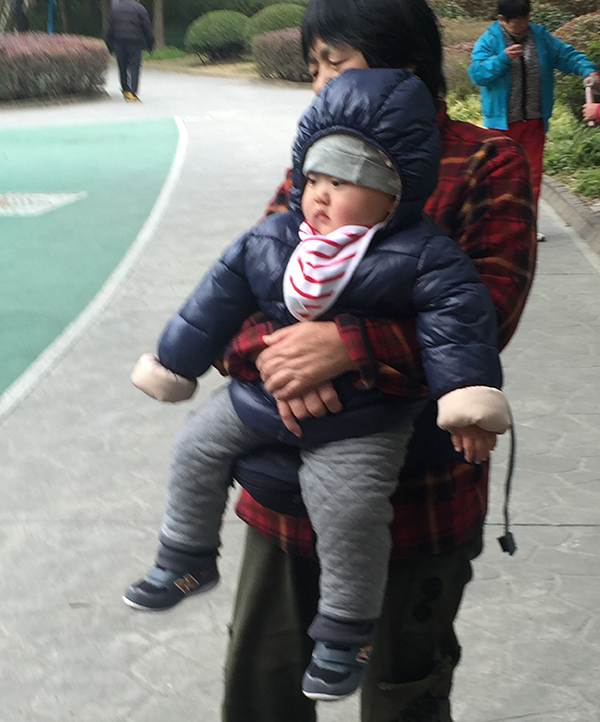 A great Chinese neighborhood should also have a couple really decent restaurants where you know the proprietors and they know what you like. Here my neighborhood is a little lacking. The best food option is the niurou lamian shop across the street. The family that runs it is very nice and they have this dish called jianbing 剪饼 – cut bread – which I’ve never seen at any other lamian place. Every time I come in they ask me “Jianbing yao ma?” – you want the jianbing? – even though the answer is always yes.

Then there’s the teahouse. I discovered it randomly one day when I was shopping for plants. It’s a few blocks down the road. You can’t see it from the street and there’s no sign for it. You reach it by passing through a tea shop. It’s basically the tea shop’s sizable back terrace right on the water. A pot of high grade tieguanyin 铁观音 goes for RMB60. You can sit there as long as you want, sheltered by the trees, watching the water flow past. That’s a really good place. 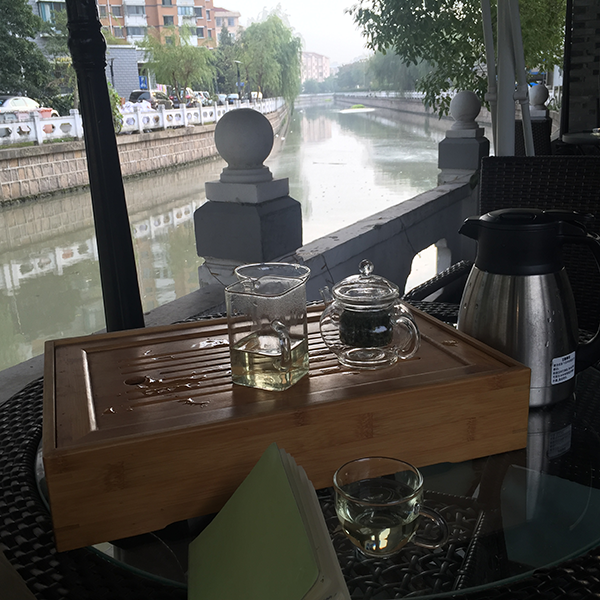 A great Chinese neighborhood has a quality haircut place – no fucking Wenfeng. How that Wenfeng dude cornered the market on Chinese haircutting remains one of the world’s great unexamined business cases. I’ve got a great haircut place right across the street–total rockstar. They blast house music and Kendrick Lamar and Chinese pop. They give long hair washes with plenty of massaging of the head and neck. They even place a hot towel under your neck. The barbers aren’t great, they always seem to make a hash of it, but it’s always an event when you come in. Even better, this haircut place sells booze.

That’s something my neighborhood lacks – a proper bar. The closest one is in Thumb Plaza. This is a great puzzle. I don’t understand why Chinese neighborhoods don’t have a least one local bar. There must be 10,000 people living within a 4 block radius of me. Surely at least half of the husbands must be desperate for a place to go at night where they can escape the drone of the TV and their wives and their kids.

Why doesn’t someone gut one of those ubiquitous shops selling stationery or 五金 or “premium” cigarettes and open a bar? Put Stella on tap. Hang a dart board. How could this not work? There must be laws preventing this from happening. Maybe if bars were allowed in Chinese neighborhoods the nation would collapse. This is possible. There can be no other explanation. Could a bar – even a bad one – somehow be less profitable than this shop? 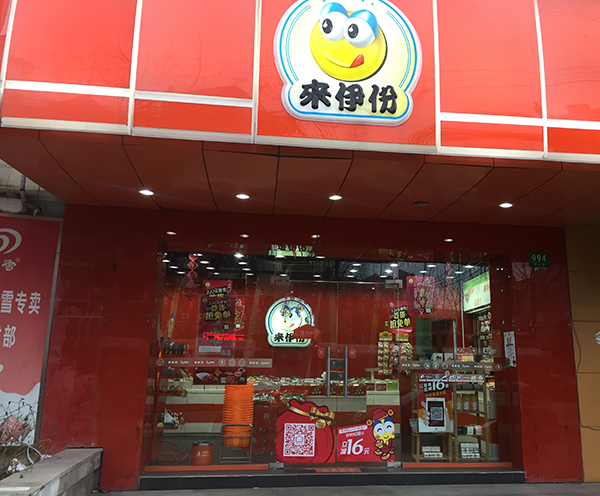 And then look at the shop right next door. It actually sells booze! 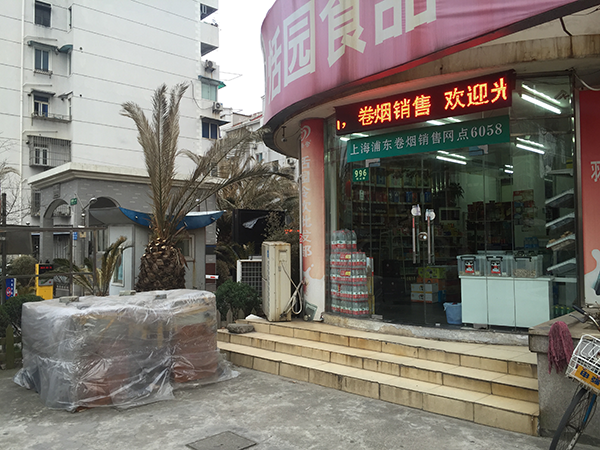 All it needs is a fridge and a few plastic tables outside in warm weather for a makeshift terrace and you’ve got a winner. Throw some Brooklyn Pale Ales in there and you’ve got a new hipster hangout. Boxing Cat tap takeover and an Austin Hu barbecue pop up and Smart Shanghai is reviewing the hell out of that shit calling it the greatest thing since Mortinis.

And then suddenly my neighborhood is Yongkang Lu. Yeah fuck that. Maybe we’re better off without a bar.

2 thoughts on “Why Chinese Neighborhoods Are The Best”