It started with a conversation in someone’s living room between three foreigners during the recent Victory Day Holiday. “Shanghai’s boring. There’s nothing to do here anymore. Nothing’s new. Nothing’s interesting,” said one. “How come there aren’t any good clubs? In a city this size there should be awesome clubs playing good music every night of the week,” said another. “Yeah, there should be like 10 URVCs–each one playing a different type of music,” answered the first. “It’s a war,” added the third. “It’s a war on anything decent that is held in common.” Part of it, I concluded, is lassitude and age. Collectively, these three expats have half a century worth of years of life spent in China. But that’s not the whole story. I thought about Shanghai’s Great World. 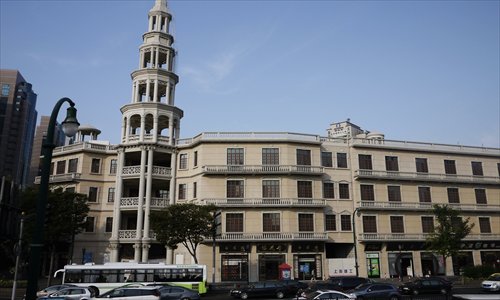 The Great World (Da Shijie, 大世界) sits prominently at the corner of Yan’an Lu and Xizang Lu. No doubt you’ve whizzed past it many times on the Gaojia, but you’ve probably never been inside. That’s because it’s been closed since 2003–for restoration, it was said at the time. In 2010 it was supposedly opened again for Expo, but there’s no documentation that it was ever open to the public and, even if it had been, it was shut down quickly. No one knows why it’s shut. “方案还没有确定,” says this site (“The plan has not yet been decided”). The last time Shanghai’s Great World was shut for so long? The Cultural Revolution.

The closure of the Great World is not a coincidence. The government didn’t forget about it. The “方案” wasn’t misplaced by a sleepy official. It’s symbolic. But of what?

The impression of the Great World passed down to foreigners has been formed almost entirely by a single passage in this autobiography by film director Joseph von Sternberg, Fun in a Chinese Laundry:

“The establishment had six floors to provide distraction for the milling crowd, six floors that seethed with life and all the commotion and noise that go with it studded with every variety of entertainment Chinese ingenuity had contrived. On the first floor were gambling tables, sing-song girls, magicians, pick-pockets, slot machines, fireworks, bird cages, fans, stick incense, acrobats and ginger. One flight up were the restaurants, a dozen different groups of actors, crickets in cages, pimps, mid-wives, barbers and earwax extractors. The third floor had jugglers, herb medicines, ice cream parlours, photographers, a new bevy of girls their high-collared gowns slit to reveal their hips, in case one had passed up the more modest ones below who merely flashed their thighs.

“The fourth floor was crowded with shooting galleries, fantan tables, massage benches…the fifth floor featured girls whose dresses were slit to the armpits, a stuffed whale, story tellers, balloons, peep shows, a mirror maze, two love-letter booths with scribes who guaranteed results, ‘rubber goods’ and a temple filled with ferocious gods and joss sticks. On the top floor and roof of that house of multiple joys a jumble of tight-rope walkers slithered back and forth, and there were seesaws, lottery tickets, and marriage brokers.

“And as I tried to find my way down again an open space was pointed out to me where hundreds of Chinese, so I was told, after spending their last coppers, had speeded the return to the street below by jumping from the roof…”

It’s a colorful depiction, but probably wise not to take it too literally. Keep in mind this book was published in 1965, three decades after Sternberg’s visit to the Great World. Besides, take a look at the photo again: there are only 4 floors in the Great World. Where did Sternberg’s other two come from?

Despite the hyperbole, it’s clear that the Great World was a destination for Shanghainese of all walks of life and of all economic classes. There was something for everyone. It was a place where the city came together and enjoyed itself. It wasn’t a shopping mall and it wasn’t Disneyland. I imagine it as something like the fake market of local entertainment, a sort of round-the-clock, round-the-calender temple fair of whizbang wackiness where you could get your hair cut, your fortune read and get slapped in the face by a clown all in the same afternoon.

There are two other–more sinister–aspects of the Great World worth mentioning. First, on August 14, 1937, it was the scene of a great tragedy. Chinese air force bombers who had been meant to bomb Japanese ships at anchor in the Huangpu mistakenly dropped bombs that landed just outside the Great World, killing over 2,000. It was a black eye for the Republican government which was desperate to show that it could hang with the invading Japanese. The mistaken bombing happened on the second day of the Battle of Shanghai. The day later became known as “Black Saturday”. 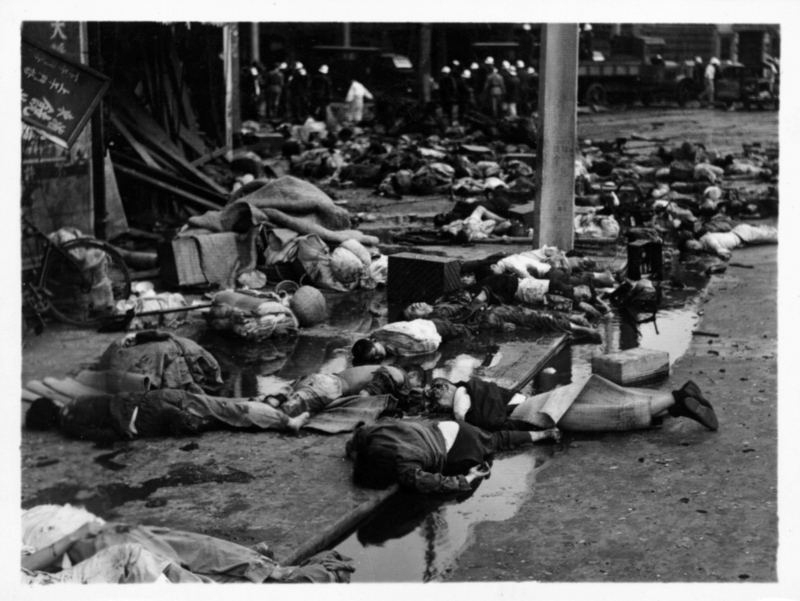 Second, the Great World was arguably the place of origin of the Shanghai triads, or at least the place where they went mainstream. According to this article, after the original owner died in 1931, it was taken over by Huang Jinrong, Pockmarked Huang, the legendary mentor to Du Yuesheng. This is probably apocryphal. Pockmarked Huang was an important figure in the Shanghai underworld, but his day-to-day front was operating a ring-toss game at the Tianhougong–a Daoist temple–not exactly Tony Montana large. Most likely he came to organize the criminal elements of the Great World–the pickpockets, the pimps, etc. Regardless, vice went hand in hand with the polyglot crowds and in Communist Chinese history the Great World became known as “a paradise for monsters and demons and a den for enemy agents and traitors camouflaged by beautiful music and graceful dancing”. It was, in short, a rival for power.

All this is far away from normal Shanghainese. Shanghainese older than 25 fondly remember the Great World. Post Cultural Revolution it morphed into a place catering to kids. And almost all of them remember one thing in particular–the hahajing (哈哈镜, distorting carnival mirrors) which took up an entire wall near the entrance. Recently, a Shanghainese friend of mine went on and on about how she loved these mirrors and laughed madly at the hilarious distortions they made. She was 7 or 8 at the time. Her mom had to drag her away.

It’s strange to think how the Great World has quietly slipped off the map–both literally and figuratively. You won’t find it on Google maps. It’s right in the middle of the city and yet it’s almost invisible, its four-tiered cream-colored cupola stack perpetually dark. Shanghainese people somehow think it’s still open and are mildly surprised when I tell them it’s not. They aren’t upset or anything that it’s closed, just surprised. In their minds, it’s still open for business. But the Great World inside, how long can it support the fiction that it still exists out there? Or that what exists out there still deserves the title “Great”?

If nothing else, Shanghai could stand to look at itself in the hahajing. Hopefully it will once again be amused by what it sees.

3 thoughts on “Whither Shanghai’s Great World?”