A few weeks ago, before the end of the year, I found myself wandering around Lujiazui at 7:30 in the morning. It wasn’t the good part of Lujiazui you see in photos, but the part with waterstained concrete buildings dating back to the 1990s. I was looking for the Huaxia Bank Building which holds a branch of the Ruici Clinic where I would finally join one of the last great events still in existence from China’s Communist past–the health check. 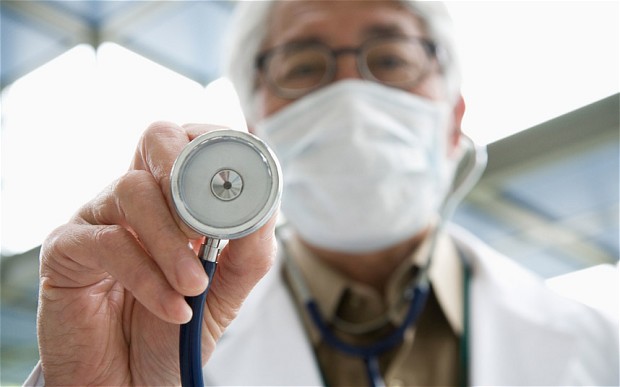 It’s an annual event in China, the health check. There’s nothing like it in the west, or anywhere else in the world as far as I can tell. Even in the UK, the NHS-provided free health check is only for people between 40-74. And even then you’re only given it every five years. In America? Forget about a health check unless you’re rich.

If you work at a company in China, you probably got an email from your HR department letting you know about it along with a list of instructions on how to take advantage of it. Maybe those instructions were translated into English, maybe not. The health check, it must be said, is a super Chinese thing.

The health check is free. Or rather your company pays for it. Not all companies provide it. My last company–a Swiss WOFE in Beijing–did for a few years and then didn’t. My current company does. A lot of companies do, maybe most. It’s considered an employee benefit and like most benefits it only comes at the end of the year. Almost all Chinese employees take advantage of it, at every level of the company, from the ayi up to the Managing Director. It’s a holdover from the days when your danwei provided everything you needed for life.

To book an appointment you have to dial into a Mandarin-only phone tree which only operates at certain hours of the day and even if you are lucky enough to get someone on the line, in order to make an actual booking you have to tell them your name–probably your Chinese name–and the Chinese name of your company and then the appointment must be carried out at a branch of one designated chain of clinics and at the designated time which is 7:30am-10am.

Little wonder that foreigners just can’t be bothered. I’ll bet most foreigners don’t even know the Chinese name of their company. When I was at the Swiss company I never did it.

Beyond the logistical difficulty of even getting an appointment, there’s the nature of the facility itself. First off, it’s a clinic (诊所 zhensuo), not a hospital (医院 yiyuan). That puts it a rung just above those community deals you see in residential neighborhoods with trembly Chinese people with bandaged heads perpetually lined up outside them. It doesn’t inspire confidence.

At least that’s how I was feeling when I finally found Ruici Yiliao (otherwise known as the Rich Healthcare Group) clinic stashed on the third floor of the Huaxia Building.

I walked into a bright, high-ceiling space with walls far apart. Things were already in full swing. Directly in front of me was the waiting area. To my left was a counter with a glass partition and people lined up. Clearly this had once been a bank. Fortunately since I had set up my appointment in advance there wasn’t much of a wait. After being given a clipboard with a couple of sheets of printed paper attached I was directed to the glass partition. That was when I realized the people at the glass partition were actually having blood drawn, 6 at a time, side by side by side. Nurses on the other side of the partition were filling up test tubes racks with blood samples. Tourniquetted arms layed lifelessly on the counter. For a moment I strongly considered forgetting the whole thing. But I toughed it out.

After that it’s into the machine. Basically you have to hit some two dozen stations in a sequence dictated by your clipboard. At each station they do a different diagnostic test on you. After each one the doctor checks it off and sends you to the next one. This will be familiar to foreigners who work in China–it’s not too different from the medical check you undergo to get a work permit. Here are the stations I remember:

Station 1–bone density. You stick your foot in a machine and then the nurse clucks her tongue and tells you you lack calcium. She tells everyone this.

Station 2–height and weight and blood pressure. Blood pressure is automated. You stick your arm in this hole and then it kicks to life, clamping down on your arm like you’re never going to get it back.

Station 5–ear test. An old Chinese doctor sticks this thing into your ear then peers into it then grunts.

Station 7–ECG. They make you strip and lay down then rub cold weird goo on you and attach some suction cups which are connected by wires to something that looks like a car battery.

Station 8–your innards. More laying down and more cold weird goo and some old Chinese lady doctor runs a probe all over your midsection while watching the results on TV. She tells me I have a small stone and that I should drink more water. She shows me a black and white ultrasound image of my intestines. They look like large white worms nesting.

Station 9–x-ray. The tech stays in the room with me. Is that normal?

Station 10–lungs. Doctor puts the stethoscope to your chest in ten different places and listens intently. For what?

Station 11–piss. You get a ridiculously small cup and a flimsy plastic thingy from the attendant who is set up right outside the can. Chicks to the right, dudes to the left. Afterwards you line up to hand him your piss and hope he labels it properly. There is something existentially challenging about standing in line with men and women who are all holding samples of their own piss. You realize: there is no more magic in the world.

Station 12–”healthy breakfast.” Your last stop yields a cup of dounai, an orange and choice of a croissant wrapped in plastic or a huge mantou.

What really interested me about the whole experience, though, was how egalitarian it was. There were people from all walks of life, from all economic classes. There was the guy getting blood drawn next to me who was yakking into his cell phone–”Sell! Buy! Tai guile! Buxing! Zaishuo! Zai Yiyuan! Tijian!”–while the nurse extracted two vials of blood from him. While waiting for the eye station I sat next to a person in the uniform of a city sanitation worker. For a moment I thought it was a clinic ayi until her number was called and she went into the little exam room. The only other foreigner I saw was an Indian guy.

While waiting for another exam I saw an older Chinese man, looked like a peasant in from the countryside, face coppered by the sun, wrinkles around the corners of the eyes from squinting all the time, maybe 50 or 60 years old. He had no idea where to go next or what to do. He still had on his winter coat. Two nurses  were helping him figure things out. As they did he absently fingered the zipper of his coat, moving it up and down. It suddenly came off in his hand. He didn’t miss a beat, just dropped it inconspicuously onto the floor and pushed it aside with his foot. For some reason I felt great sadness in that.

But that’s what it is–the great Communist melting pot. The laoban, the secretary, the sales guy, the hot marketing chick, the random foreigner all thrown together, reduced to a clipboard and set of numbers, prodded by nurses, lectured by old lady doctors, our asses violated one at a time.