Shanghai (上海) may have an ocean (海）in its name, but it is and always has been a river town.

When I first came to Shanghai in the late 1990s, I lived in a flat on Changle Lu. There, at night, deep in the FFC, I could hear the foghorns from the big ships on the Huangpu booming out across the city, deep and plaintive. Around the same time, Lou Ye’s seminal film Suzhou Creek came out, a compelling noir set against against the filthy wrack of its namesake, which announced the arrival of the 6th generation of Chinese filmmakers. But after that Shanghai’s rivers and creeks went silent, absorbed into the background of the city’s race outward, upward and ahead.

But things were happening. Successive five-year plans saw Shanghai’s riverways quietly cleaned up. The smoke belching barges that plied Suzhou Creek were phased out. Waste-dumping factories were moved away. Old brick warehouses were bought up and retrofitted with cafes, restaurants, condos and co-working. Bit by bit, section by section landscaping was introduced along the banks of Shanghai’s many waterways. In 2008 the Cool Docks (老码头) emerged out of the warren of the south Bund and then with Expo things really went light speed. River-front property once again commanded top dollar.

But more importantly, Shanghai’s rivers once again commanded people’s interest. In late 2017 the threads came together when the Huangpu Riverwalk was completed. The riverwalk, which encompasses both Pudong and Puxi, runs uninterrupted for over 25 kilometres. It has running lanes and bike lanes and rest stops and grassy lawns and public sculpture and places for kids to play. I’ve walked and cycled it on both sides – from Yangpu Bridge in the north to Xupu Bridge in the south.

And it’s not tourist window dressing; it’s a living part of the city. I find myself drawn there almost every weekend, and not only because I have a kid and live in Pudong. I go because I can find scenes like this: 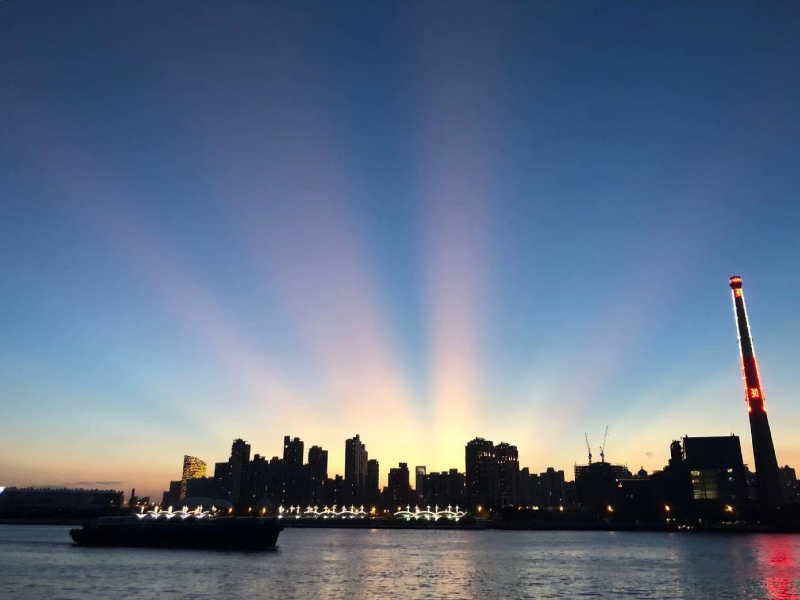 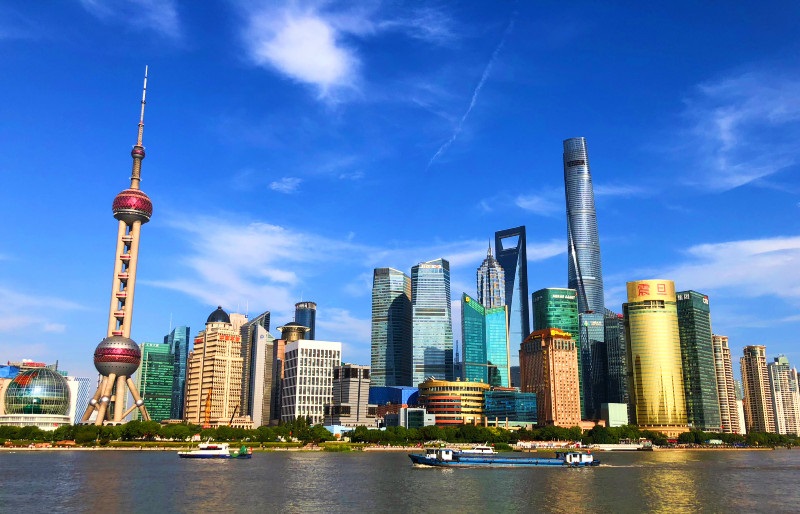 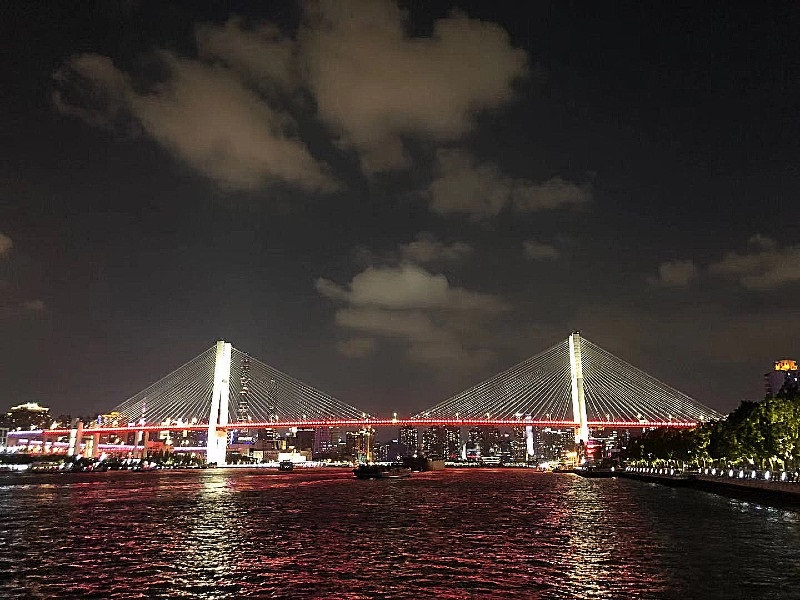 The Huangpu River is first mentioned in historical records in the late Song. In the centuries before that it was the Dong (East) River people wrote about. The Dong drained Taihu Lake, debouching into the Bay of Hangzhou near Pinghu, but sometime in the Southern Song it silted up. Consequently, flood control dykes were built up, diverting it to the east past Songjiang, which galvanised Songjiang to become the pre-eminent settlement in the area. After flowing east for a bit, the Dong connected up with the Huangpu, near the place where it takes its famously sharp 90 degree dogleg to the north. From there it linked up with the Wusong around present-day Jiaxing Lu.

At the time, it must be said, neither the Wusong nor the Huangpu were particularly impressive — mud banks and barely 50 meters across. Both silted up regularly. In the Ming debate raged in official circles over which river should be prioritized for flood control. The Huangpu won out and was dredged 9 times over a 100 year period, which also caused the place where the Huangpu emptied into the Yangtze to change from Gaoqiao to its present location – Wusongkou.

By the 15th century, the Huangpu had achieved its present shape, though it was still narrow compared to the 400m berth it commands today. It was only in the early Qing that the Huangpu was finally made wide and deep enough to carry ocean-bound cargo ships, at which point it finally usurped Suzhou Creek as Shanghai’s primary waterway. By the late 19th century China’s modern industrial revolution was in full swing on its banks in the form of vast shipbuilding yards, warehouses and factories.

Beyond the Huangpu and Wusong many other creeks and canals have left their mark. Shanghai’s rivers, creeks, canals and waterways – those still with us and those long gone – form a palimpsest of the city’s history and character.

There was the Yangjingbang which for half a century separated the British and French Concessions and today is Yanan Dong Lu. It was known as one of the foulest waterways in Shanghai because neither the French nor the English would accept financial responsibility for its upkeep. 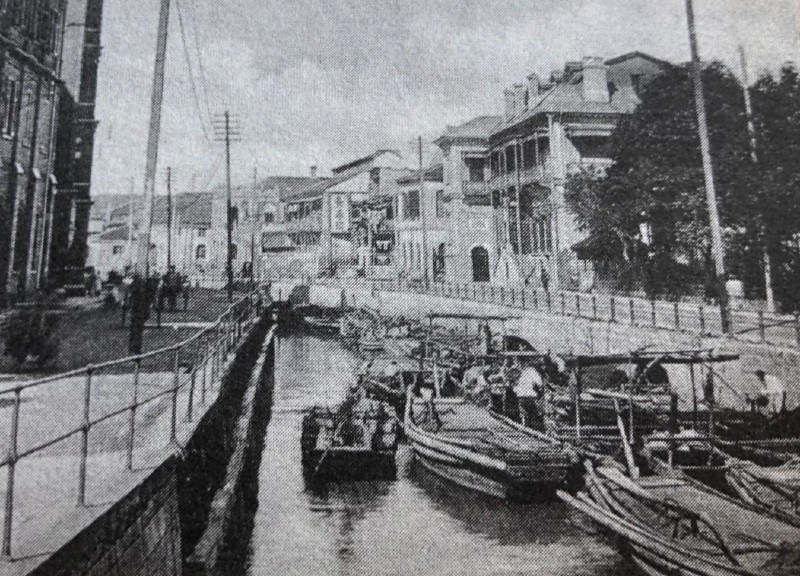 In the south of the city, Longhua Creek was famous for peach tree groves lining its banks and its view of Longhua Temple pagoda. Writers waxed poetic about the reflection of the pagoda on the river in autumn, widely publicising it as one of the “must-see” sights of old Shanghai. The creek is still still there, but the peach groves are long gone. 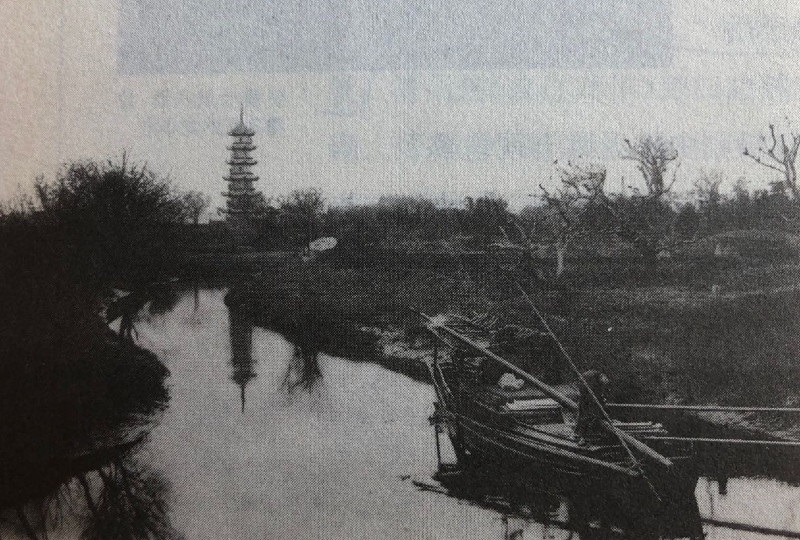 Lujiazui – now a major financial capital – was for centuries a sandy bank built up by debouchment of Suzhou Creek. There, between the skyscrapers, you can find tiny little Huayuan Shiqiao Road. It’s the last vestige of the Lu Family (the “Lu” of Lujiazui), having been named for a bridge which crossed the creek which demarcated a boundary of their estate.

Before it was a major traffic artery, Zhaojiabang was a canal connecting Xujiahui (and the little villages to the west of town) with the Chinese old city. Along its banks lived the poorest of Shanghai’s poor. Entire families crammed into small wooden rooms which hung precariously over the water, sometimes one on top of the other. 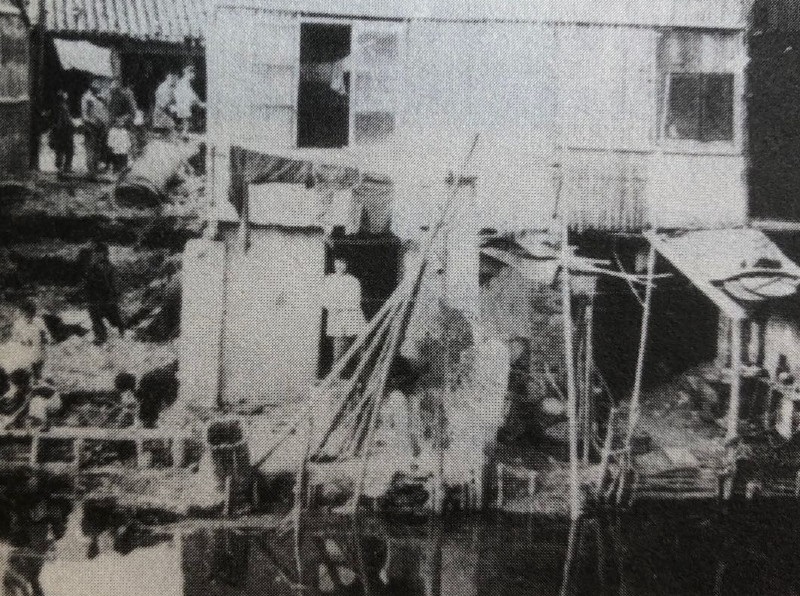 Lichongjing – today Fahuazhen Lu – was once lined by stately Chinese mansions and boasted a grand Buddhist temple – Fahua Temple. All that remains of the temple are two ancient trees on the campus of Jiaotong University and the man-made lake at Tianshan Park. The lake was formed in 1959 when earth was dug up to fill in the last stretch of Lichongjing. 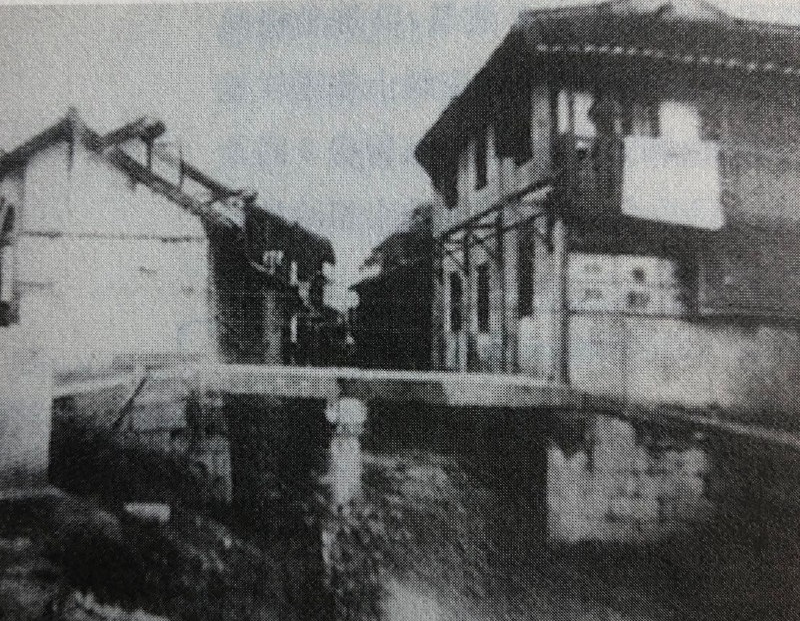 These are just a few examples. Somehow it is both ironic and fitting that the Yangtze, one of the world’s truly legendary rivers, hardly figures into this story at all.

The first bridge to cross the Huangpu wasn’t built until the 1950s. Before that it was just ferries. And for most of those decades, the ferries weren’t much more than family owned sampans enjoying varying degrees of official patronage. On January 5, 1911 Shanghai’s first municipal ferry service went into service, connecting Donggou in Pudong to the Bund. It was also Shanghai’s first ferry service using a motor-powered boat. In the late 1920s, the Shanghai government stepped in to regularise the business. By the 1937 there were 6 official ferry lines connecting Puxi and Pudong. The grandest of them all, though, was the Number 6. 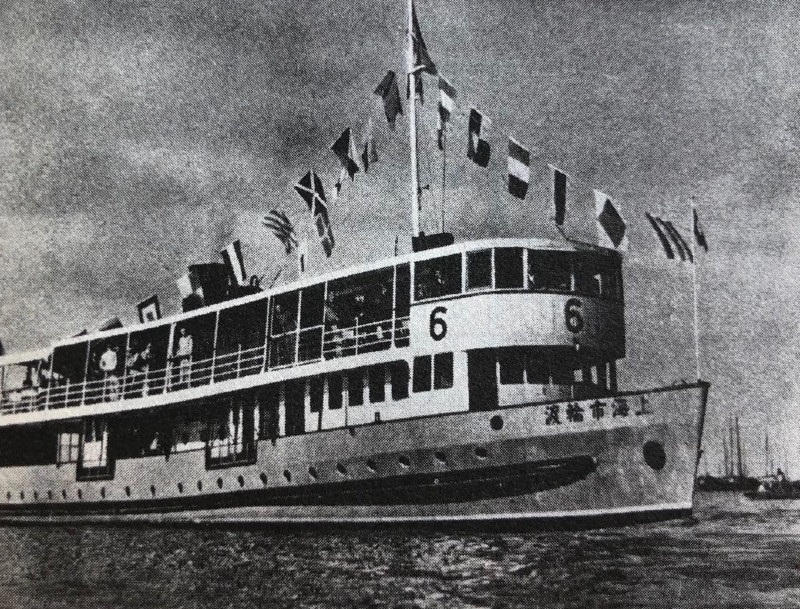 The Number 6 made the 24km run between the main Bund wharf (at Beijing Xi Lu) and Wusongkou where the Huangpu meets the Yangtze. It ran under steam power, could carry over 800 passengers and was divided into three classes. First class boasted porcelain tea service, a bar, leather sofas and indoor plumbing. By the 1930s, riding ferries was no longer just a means of crossing the transportation, but a form of local amusement.

What would you see if you had been a passenger on the Number 6 on a summer’s day in 1934, sipping a highball and gazing out the window at the world rolling by?

Leaving behind the stately Georgian and Edwardian architecture of the Bund, you first pass by the mouth of Suzhou Creek spanned by the Waibaidu Bridge, made of black iron. Then comes the Astor, Asia’s finest hotel at the time. Farther along you see brand new warehouses and factories, large imposing brick structures, avatars of China’s dawning Industrial Age, then the distinctly turreted outline of the municipal waterworks – still there after all those years. This is followed by the big shipbuilding yards of Yangshupu.

Shortly thereafter, on the Pudong side, just before the boat swings to the north, the unmistakable curling eaves and yellow-painted walls of Qingning Temple heave into view, now long gone. Across from the temple on the Puxi side you pass the southern tip of Zhoujiadao, a sandbar being reclaimed and built out into the Huangpu’s only island. Today it is called Fuxing Dao and in 1949 it would be the last piece of the mainland Chiang Kai-shek touched as he fled ahead of the Red Army.

After that, the landscape turns more rural. Fisherman bringing in nets stare back at you. You pass ferry terminals every few kilometres, arrayed in pairs, one on each side of the river. These are wooden structures with beamed roofs, sometimes built over the river on wooden stilts, sometimes built on pontoons which drift up and down with the tide. Taitong Lu, Qichangzhan then finally Gaoqiao ferry – all of them still there.

Beyond that, the riverbank becomes silted mud and waving reeds until you get to Wusongkou where a retaining wall and fortifications betray its military importance. After glimpsing the yawning girth of the Yangzte, your boat turns around for the return trip.

See It for Yourself

The good news is you can still make this trip. A boat runs once every Saturday and Sunday (and Chinese holidays) leaving from Shiliupu around noon and coming back around 4. It’s a nice boat, a big boat, a satisfying answer to legendary Number 6. A ticket runs less than RMB200 and can be bought at Shiliupu. It’s not as crowded as the cruises which go no farther than the Yangpu Bridge. I took it on National Day last year and had the entire open air upper deck to myself. 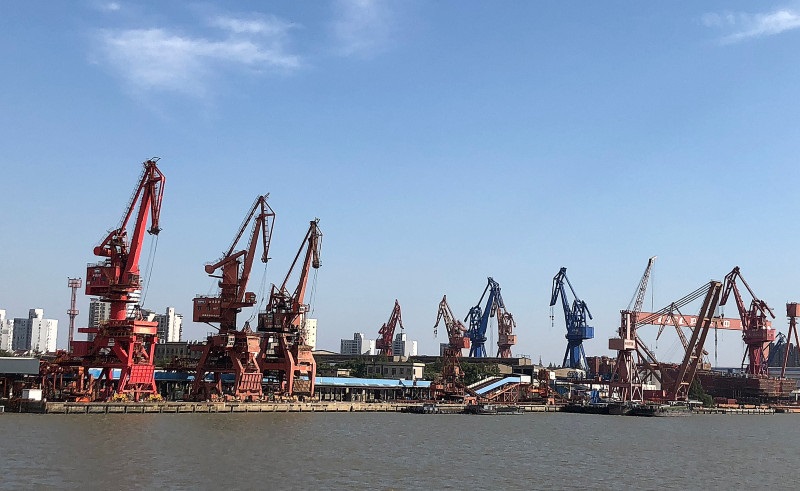 The ticket comes with a buffet lunch and a show. Both can be skipped. Instead, pack your lunch, sit back and enjoy the view as the story of global commerce unfolds around you on a staggering scale. Huge ships in drydock, massive gantries loading and unloading a mountain of yellow, blue and red shipping crates, giant grain elevators feeding mammoth silos. There are even a couple submarines moored out there if you keep your eyes peeled. 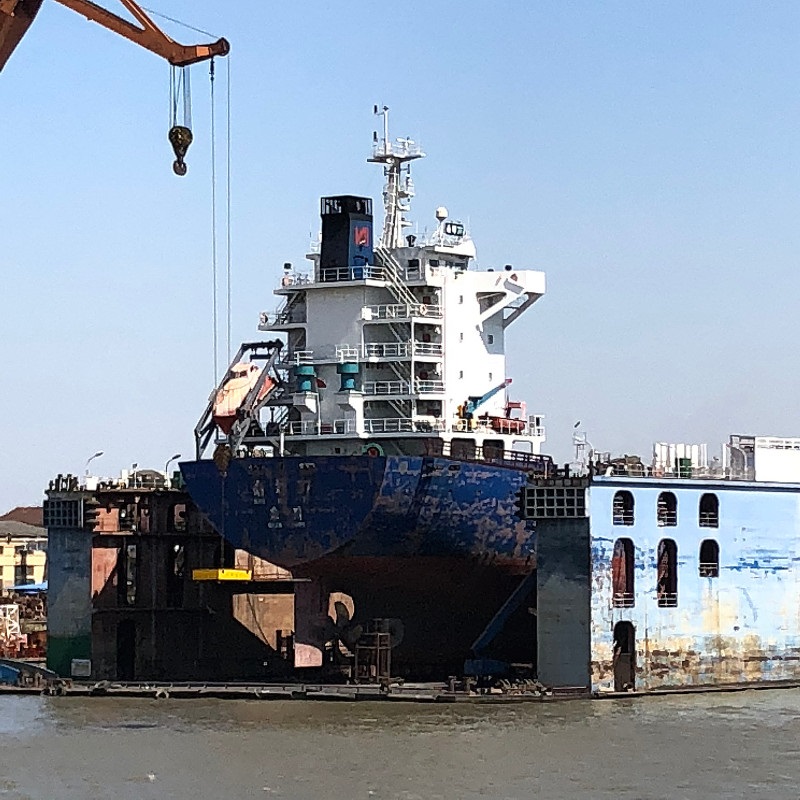 At the end you’re rewarded with a stunning view of the mighty Yangtze. 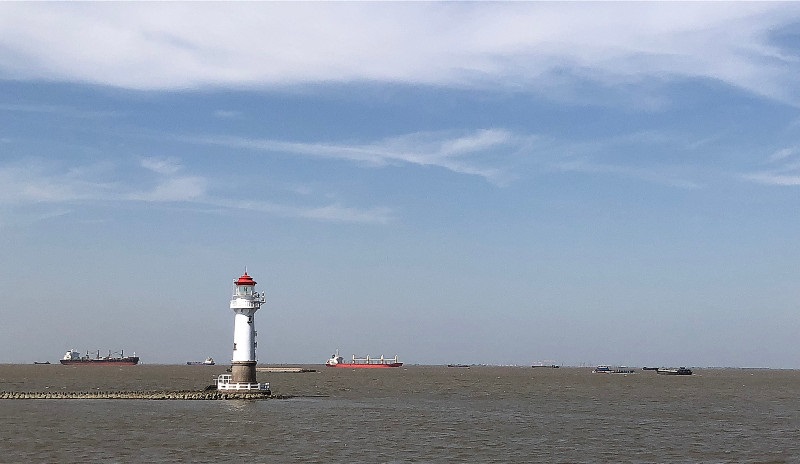