This summer marks four years living in Pudong, split between Century Park and Jinqiao. I used to think it was a curse, but over time I have come to see it as a blessing, especially for someone like me who loves cycling. Over the last four years I’ve cycled all around Pudong. Nature here is much more accessible than in Puxi. It’s a great way to spend a sunny Saturday. So I’ve put together this guide to my favorite Pudong cycling routes.

First off, let me explain that I am not talking about time trials around Century Park at 5:30am. Contact these guys if that’s your game. My thing is all about exploration and these days I’m riding my steel On One fitted with slicks and a rack for stuff. It’s not the most efficient bike in the world, but ends up being slow and nimble enough to be safe (I’m cautious about riding my roadie on Chinese roads after this happened), as well as excellent training, especially as the wind invariably blows in strongly from the south and east. Sometimes I’ll end up doing more than 100km in a day with a few stops here and there, but most of the time it’s around 60km. 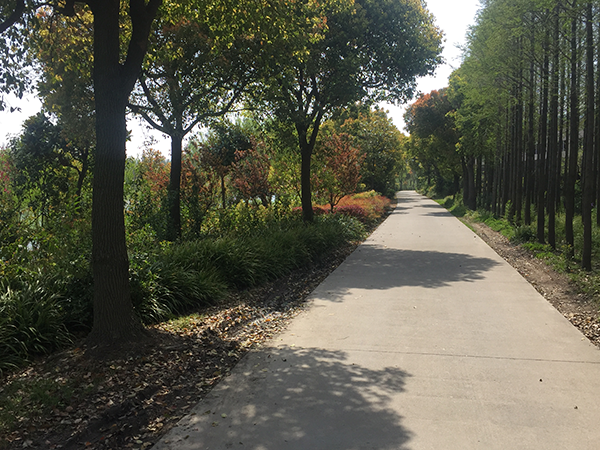 Wonderful cycling road near the breakwater

This is my go-to route, only 60k round-trip so it only chews up four hours. The pay-off is that you can reach this little point on the Yangtze (marked with the star) which is  opposite Chongming Island and directly under the landing path of the jumbo jets bellying down into the Pudong airport. It’s all man-made concrete breakwater out here, and on pleasant days you’ll find plenty of Chinese people milling around, but it’s pretty empty by Shanghai standards. You can watch the big cargo ships ply up and down the Yangtze and see the planes come in suspended above your head in empty blue space. They are close enough to the ground that you can make out what airline they are from, but not so close to be too noisy.

Between the G1501 and the breakwater is pretty much a big strip of rural land. There’s a wonderful canal and a really outstanding bit of blacktop that runs alongside it north for a good 10km. There are very few vehicles and you can really get in a good pedal. Plenty of nice scenery here. Don’t go south towards the airport from there, though. The road devolves quickly into mud once you get abreast of the Shanghai Links Golf Club. I guess rich people like to keep things inconvenient for the local peasantry.

Another reason I like this route is that the way out, the big straight push down Longdong Avenue (the S121) is really quite okay. There’s bike lane walled off from the main road and not that much traffic. They recently completed some road construction and, aside from a tricky maneuver at the Zhangjiang Expressway exchange, it’s a straight shot. You’re into the wind so you really get the leg muscles going. Coming back in is really fast, too, because you’ve got the wind behind you and the roads are really bike friendly. Come in through Jinqiao and  stop for a meal and a beer at one of the handful of restaurants in Biyun with outdoor seating. A nice way to end the ride. One of these days I want to stop in at the Pudong Jinhai Wetland Park and see what’s what there. 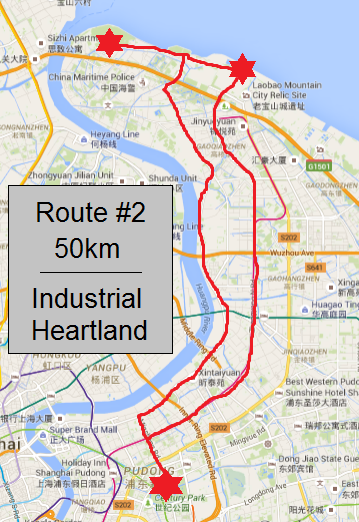 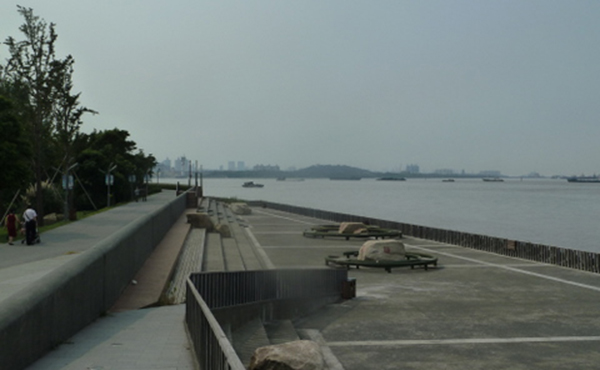 Confluence of Yangzte and Huangpu Rivers 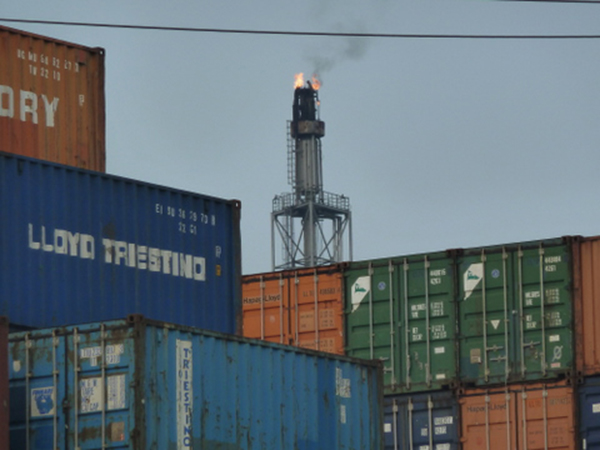 There is something stirring about seeing flames burning in daytime above a pair of 200ft smokestacks. There’s something awesome about massive cylindrical tanks containing gods-know-what. There’s something supermodern about riding through yards with thousands upon thousands of shipping crates stacked on either side of you. And then there’s that vaguely chemical smell which permeates the air in the industrial heartland of Pudong.

This is not a fun or particularly easy ride out or in–there’s lots of traffic both big and small–but it is unique. Plus when you make it out there, there are two big payoffs. One is the Binjiang Forest Park. It’s big and really nice and sparsely crowded even on holiday weekends. You can plunk yourself down at spot where the Huangpu converges with the Yangtze–nature behind you and the lifeblood of global commerce in front of you. The only thing is, they won’t let you take your bikes in. So you have to bring reliable locks.

If you don’t want to risk that, then just head the other way after crossing the G1501 superhighway, hug the Yangtze and you’ll find some jetties you can bike down, giving you a feeling of actually being on the water. You’re not far from some little villages where you can buy cold beers. 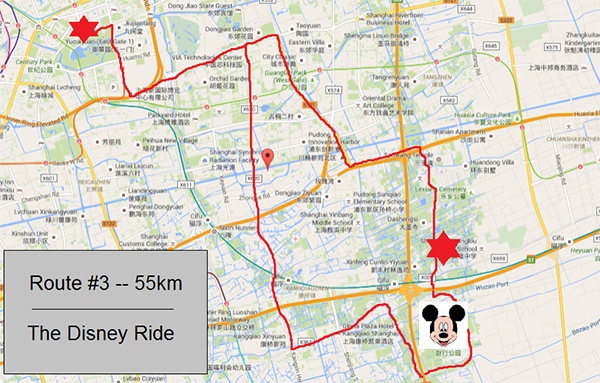 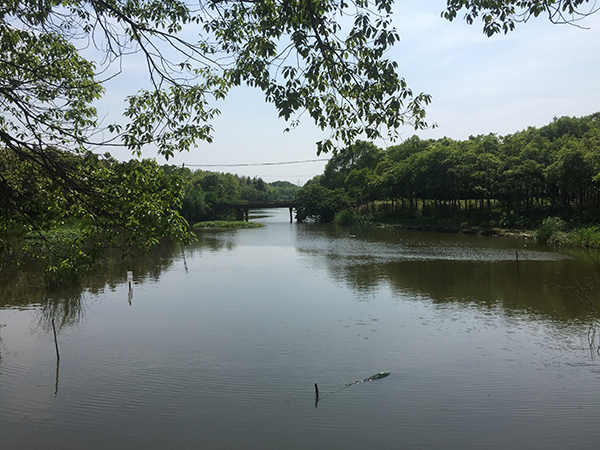 Snap from the road in the old part of Chuansha

So yes this is the now-semi-famous Disney ride. But what I actually want to recommend here is Chuansha, an old watertown that no one knows about. The payoff for the cyclist is a network of canals and ponds and bridges. It’s not idyllic like Nanxun, but then again it’s not commercial like Zhujiajiao. There are no tourists out there at all in fact. I passed a very pleasant hour laying in the sun by the side of a pond just off a small road while a silent local fished nearby.

Chuansha is actually an important footnote in Shanghai history. It was a major administrative center for many decades before Pudong became Pudong. The Soong family–the three famous sisters–also were born there and their old residence is now a museum. Along with that there is some kind of old town, but it looks rather fake, having been swallowed up by yet another shapeless commercial district which is ironically called “Chuansha New Town” (Chuansha Xinzhen). Huadong Lu–the S222–delineates the uninteresting new part and the recommended water town part.

The only other part worth mentioning is the ride back along Zhangjiang Lu. The part near Huaxia Expressway is a bit of a mess right now, but as you move further north you pass through a surprisingly nice suburban neighborhood complete with a modest little tram that resembles a mini High Speed Harmony train. Who knew?

Route #4 — Along the Huangpu 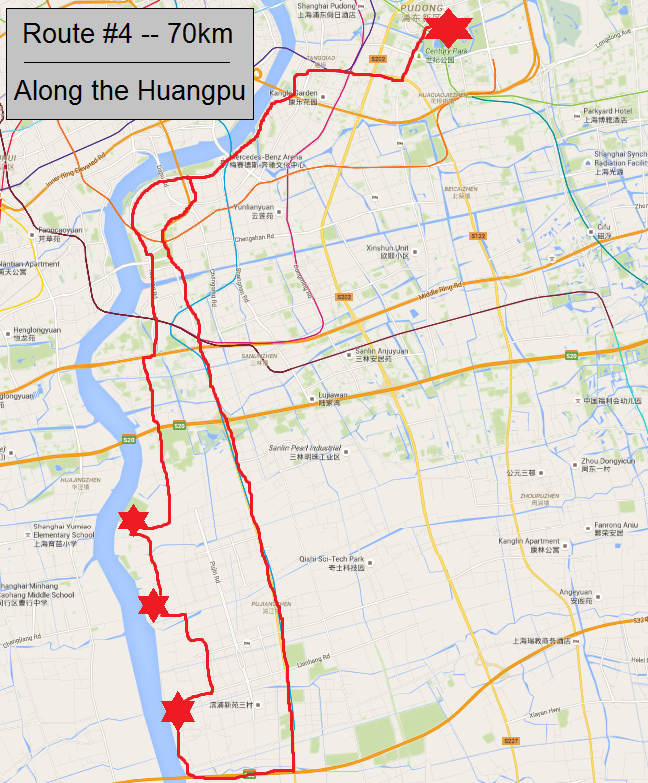 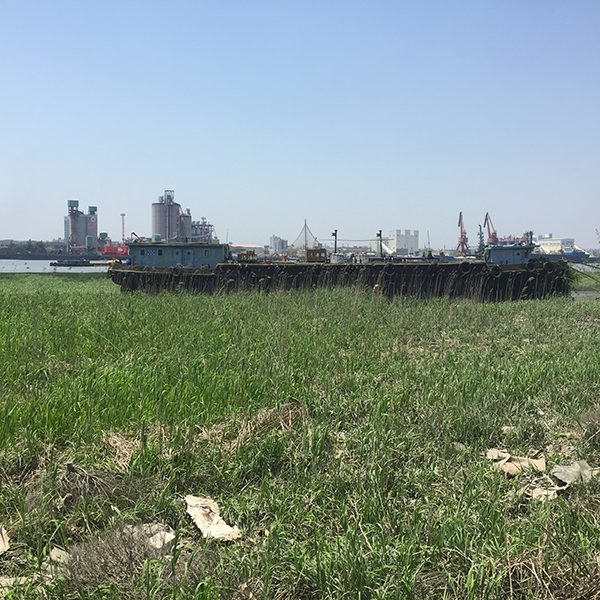 That’s all wetlands there 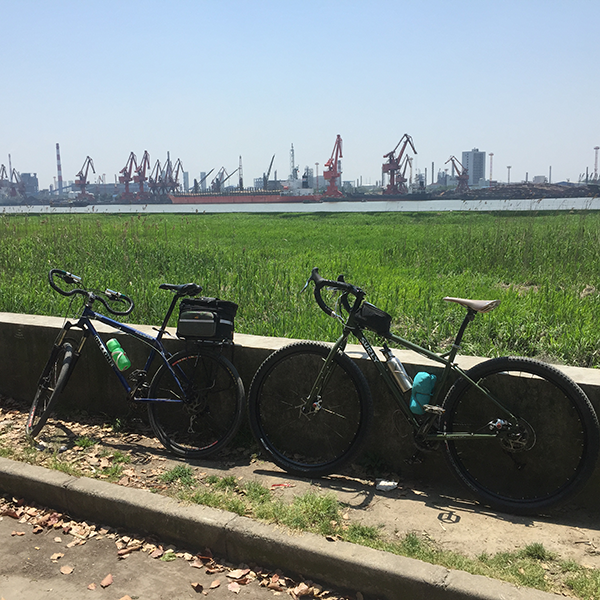 Lots of these compelling views 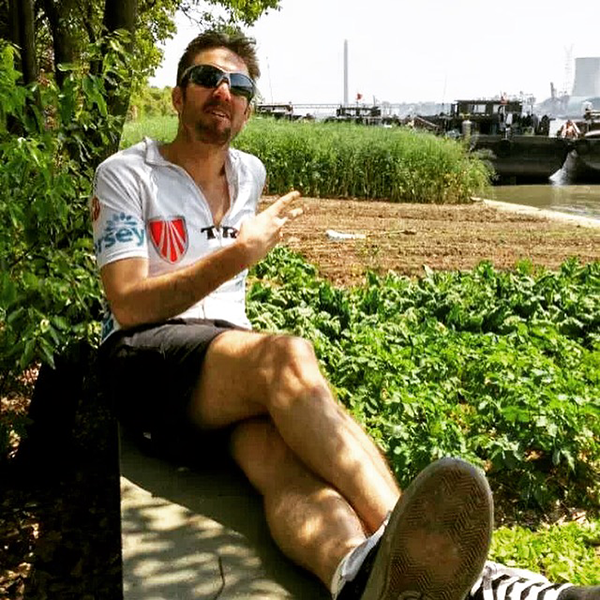 Going where no foreigner has dared go before

This is the route my Puxi-dwelling riding pals always want to take for obvious reasons. It is a bit of a haul for them to get from Puxi to Century Park and then into the deep reaches of Pudong. That’s okay because there is lots to like on this ride.

First, of course, you get the nice kick through the old Expo park, past Wellington College, until you hit the Zhong Huan Elevated (Middle Ring Road). That’s where we like to jump over to Linpu Lu, which is basically a fancy alley cutting south. On either side of it are small shops, fruit stands, barbers, etc. People wander this way and that across the road. It feels like you’re in Hubei. You don’t go fast down this road, but it’s picturesque in its own way.

You can take that for quite a way actually before it T’s to a stop. At that point just head toward the Huangpu. We were surprised to find that this bank of the Huangpu is almost–ALMOST–like a protected wetland area almost all the way down to the Shenjiahu Expressway (the Minpu Bridge). Across on the Puxi side are two massive cooling towers for some terrible, god-like power plant. But the Pudong side is actually really quite nice. There is, unfortunately, no one single road which sweeps down the bank uninterrupted. It is frequently interrupted by transport canals carved off from the Huangpu. At those points you have to point your bike inland a bit to find a crossing. But then you can usually re-acquire the river once you’re on the other side.

At the Minpu we sort of turn back, blasting up the S123 to make time. It’s a four lane highway with plenty of bike lane, but there’s alos a metro line so it gets a bit congested, though, before you hit the Expo park. Best part of this day, of course, is pulling into Paulaner for a tall cold one or two on the back patio with your bike in full view. Very nice indeed. 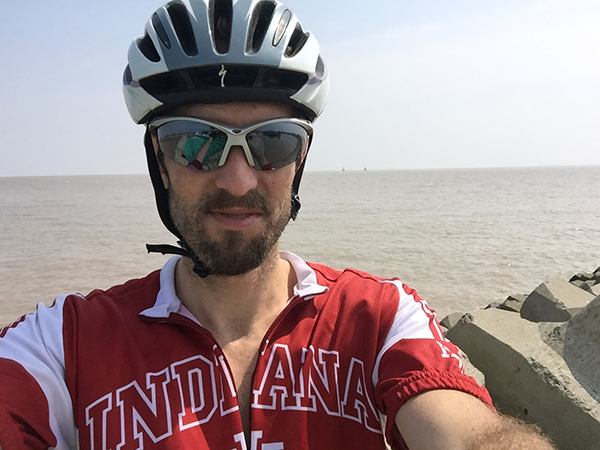 End of the road

This is the big kick with a big goal: the ocean. Okay the end point is really the mouth of the Bay of Hangzhou, but it feels like ocean and that’s what counts. This route I actually completed over the recent Dragon Boat Holiday. It’s a pretty thankless ride until you can jump onto Jinqian Lu. That’s where the loop kicks out on the map. It’s a smaller, more picturesque road. You can ride that for a good 20k until you have to jump back on the S123.

The reward is two-fold. After the S123 T’s out, you you can take a left and dive into the throngs of people at the Bihai Beach (which is called the Fengxian Beach in English for some reason). Or take a right and check out the nice long jetty and fishing wharf. Down the seashore you’ll see a big ferris wheel and pagoda so there’s some entertainment to be had out there. 20km further along is Jinshan where you can find quite a decent beach, though it too will be packed with people.

Your best bet might be to cycle to Jinshan and then just overnight it there. Enjoy the beach after the throngs have thronged. Then cycle home the next day, conquering hero style. Just be sure to bring your passport. 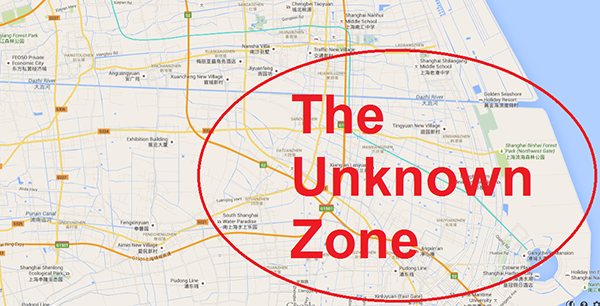 Obviously there is still a lot left to explore. I’ll get to it this summer and report back if I find any alien crash landing sites, or the mythical lost Banyan Tree village, or the missing Malaysian Airlines flight. And if anyone wants to join me for a recon mission, I’m always looking for company. 5:30am is way too early for me. But if you’re into fairly leisurely 10am starts, drop me a line and we’ll see what we can find out there (leeallenmack@gmail).

3 thoughts on “Guide to Cycling in Pudong”