I spent a week in Beijing which corresponded almost exactly with the most recent airpocalypse. PM2.5 levels held steady between 400-500 for seven straight days. This has been a regular occurrence for the last three winters. So it’s time to ask: how are we to understand Beijing’s poison fog? What insight can it bring? 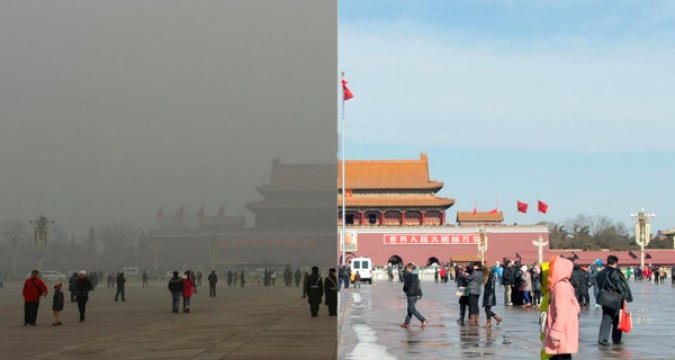 Air pollution has been a problem for thousands of years. At first it was mainly indoor air pollution, as people used whatever fuels were around for cooking and heating fires.

“Scientific studies of samples of mummified lung tissues from Egypt, Peru, Britain and elsewhere have revealed that ancient societies suffered from anthracosis, (blackening of the lungs), from long exposure to the acrid smoke of domestic fires….Testimonies of Aretaeus of Cappadocia, Aulus Cornelius Celsus, Pliny the elder and other medical writers indicate that diseases of the lungs were widespread in the classical civilizations of the Mediterranean basin….In the developing world, where heating and cooking with smoky biomass fuels such as wood and animal dung remains commonplace, in 2004 around 1.6 million deaths were linked to indoor air pollution.”

Then it became outdoor air pollution, which has been a problem since the classical age.

“Air pollution was an everyday part of life for the inhabitants of cities like Athens (population c.200,000 in 430 BCE) and Rome (population c.1 million in 150CE), where the emissions from homes,smelting furnaces, potteries and other preindustrial workshops darkened the skies.”

So what about the last 30 years in China? People who lived in Beijing in the 1980s will tell you grim stories of pollution and greyness and no sun for weeks on end. I myself lived in Shanghai from 1999-2001 and I can tell you from personal experience it was grim in Shanghai too. It was so bad that I distinctly remember–in the summer of 2001–three glorious, blue-sky days in a row. So unusual back then that it sticks in my memory even after a decade.

I moved to Beijing in 2005. The city was dusty with pre-Olympic construction, but I  don’t remember the pollution being as bad as it was this last week. I asked a few Beijing expats to point to when they felt the pollution got really out of hand. They all say it really started in the winter of 2011-12. That happens to correspond to when the original China Air Quality Index app was launched into the app store. Has the air really gotten worse or is it just that everyday we are now confronted with a numerical measure of how bad it is? I remember when the pollution climbed up the charts during the winter of 2012-13 sitting around a dinner table with friends on a Friday night checking the app and watching with horror as the PM2.5 AQI climbed and kept climbing.

Regardless, it’s bad and it’s been bad for a long time. It will continue to be bad before it gets better. But we have to assume that it will get better or the government will fall. And this is where we can start to understand the meaning of Beijing’s poison fog.

The question on everyone’s mind: why isn’t the government doing anything about? First, we have to presume the Chinese government is interested in staying in power. No one seriously questions that. And the poison fog is so bad and so obvious you can’t seriously argue that it hasn’t been incorporated into the strategy of perpetuation. And yet the poison fog persists into its third year. Let’s look at some different possible explanations.

They don’t want to do anything about it

Poison fog on a regular basis lowers expectations. A population which takes blue sky days as an unalienable right is hard to manage long-term. By taking that away, you create a generation of more docile subjects who are happy simply to glimpse the sun every few weeks. Good strategy, if the population doesn’t revolt or become so sick it cannot work or consume.

And then the sci-fi hypothesis: the pollution is an experiment in socio-biological engineering. China is a quietly breeding a population which can endure in extremes of pollution, because, it believes that is what the future of the earth holds. China will be well positioned for it.

They can do something, but there would be too much collateral damage

That could mean politically (see above), but almost certainly economically. This seems to be the mainstream thinking. The argument here is that the authorities can’t afford to take the steps required because it would slow growth and thus could act as a trigger to tip the economy.

Economic growth, in this context, is the government’s ruling mandate. But what does it mean to people? Jobs, mobility, sense of individual purpose and shared goal. Ironically that dovetails nicely with pollution’s shared suffering. Hey even Xi Jinping goes out into the poison fog without a filtration mask: we’re all in it together.

But the economic argument is not completely convincing, because there have also been plenty of other studies which show very clearly the economic cost of pollution (roughly 4-6% of local GDP). So the question becomes not cost, but to whom?

The cost of allowing pollution devolves to individuals in the form of health care. The cost of reducing pollution falls to government in the form of loss of revenues from pollution-producing SOEs as well as infrastructure cost. I argue that loss of revenue trumps infrastructure–no Chinese government ever turned down the chance to build more big stuff, especially stuff that isn’t expected to turn a profit.

Beyond that, allowing pollution reduces life expectancy which particularly impacts population at the older end of the  spectrum. This in turn reduces the number of unproductive workers as well as the number of people who make demands on government welfare. Pollution then is a big win for the government.

They can’t do anything

Poison fog problems have been solved before. London in the ’50s. Los Angeles in the ’80s. But let’s keep in mind that even though London’s Great Smog of 1952 precipitated a couple of important Clear Air acts, noxious fogs were still recurring as late as 1962. It takes decades to transition from one feedback loop to another. And one of the forces in the feedback loop has to be popular participation in group decision making (ie democracy).

Have cities without democratic processes ever been able to roll back air pollution? Poison fog has been a regular feature in Tehren the last few years. I’d like to claim that cities without popular election cannot get out of negative pollution cycles–and some studies bear that out–but there are A LOT of uncontrolled variables in those studies.

But frankly, no one seriously believes that the government can’t do anything. Come on, they did it during the Olympics. They do it every time there is a big political meeting in Beijing.

They can do something. they just haven’t decided to do it yet

This is the most interesting scenario. They have some levers, but haven’t decided to pull them. What are they waiting for? An economic risk assessment? Maybe. But more likely they are waiting for the people of Beijing to do something. To blink. To voice collective displeasure. To draw a line in the sand.

And that line can’t be virtual–that’s already been drawn. On airpocalyse days, it’s all you see on Wechat networks. No, it must be manifest in collective, real-world action. A mass protest of some kind on the streets.

But the Chinese government knows that, and has known it for centuries. Assume it’s not a secret. The Chinese government, we conclude, by holding off the solution is probing the limits of the collective tolerance of its subjects, probing the boundaries of what it means to be “Chinese.” We further posit that perhaps this describes China’s dominant political culture.

When will the people of Beijing (Shijiazhuang, Harbin, Baotou etc) break? How will they break? What will it take to break them? Will it take people visibly sick in the streets? Will it take a solid month of PM2.5 readings in the 400′s? Or something short of that?

They’ve broken before, numerous times. But the last time it happened in the capital? 25 years ago this June. The Chinese people, too, are consistently re-defining the limits of subjugation, of obedience, of political power. In this light, we see that the Chinese government, above all other things, is deeply afraid of its own population. There is no doubt about that in my mind.

So why haven’t the people of Beijing organized pollution protests? I venture that they feel protest poses more bodily risk than what the pollution poses. I venture that it will take people visibly sick in the streets to cause enough acute panic and spark real-world protest. How many people? 1 on every city block? 2 or 3? I’d say 2+ on every city block before things went into panic mode. That tells you plenty about China. Or at least my perceptions of it.

There is another scenario, one raised to me by a Beijing friend of mine. The government has some technology which would help alleviate the problem, they haven’t chosen to use it because the owners of the technology have refused to bribe them. Seriously. This is doubly compounded by the fact this technology is supposedly Japanese. So, in this case, individual greed trumps both public health AND social stability.

Whether you are a foreigner or Chinese, it is difficult to “know” China, especially from a theoretical standpoint. But sometimes if you work backwards from major spectacles such as this last week’s poison fog, you can draw insights. Or at least get clearer on where things stand in relation to one other, especially you.

Although I’d like to believe Beijing’s poison fog is a brilliant experiment in self-directed evolution, that gives them too much credit. More likely the central government is waiting for popular, real-world expression of total disaffection before taking the necessary steps to solve the problem, to push things to a different feedback loop.

There must be a crisis with enough negative global media attention to trump the internal political fall-out of putting people ahead of vested economic interest. Because, in the end, as always, it’s about face.

One thought on “Beijing Air Pollution”