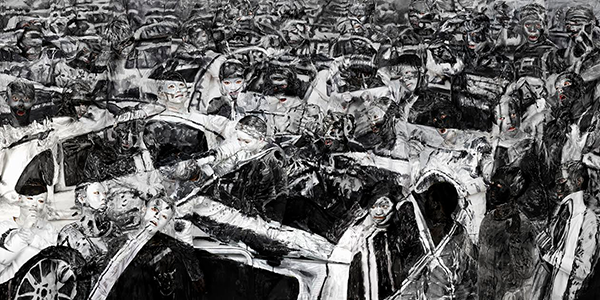 First, look at this composite image. The blast site was just a few blocks away from the National Defense Science and Technology University which houses the National Supercomputing Center of Tianjin, one of China’s major centers of supercomputing (the other big one is in Guangzhou). The shockwave from the blast was big enough to kick the Tianhe-1 supercomputer offline for a week.

Second, keep in mind that the day before the blast was another big piece of news: China’s devaluation of the yuan. This sent stock markets around the world plunging. Traditionally, supercomputers have been used for tasks like weather prediction, nuclear bomb design, code breaking, and molecular modelling. Most recently, supercomputers have been used in financial market modelling. Not just modelling, in fact, but in carrying out transactions, including, of course, FOREX.

No one knows what Tianhe-1 was working on that week. Some speculate that its general mission is to assist in operating satellites. But it could very easily have been executing trades, billions of trades–FOREX, stocks, gold, whatever. Knowing that global stock markets, which opened hours after the devaluation announcement was made, were going to take a tumble, the Chinese government could easily have made huge money.

And even though China has a number of supercomputers all capable of carrying out this kind of trading, programming a supercomputer is notoriously difficult. Tianhe-2 in Guangzhou amy be the fastest supercomputer in the world, but it takes months or even years to program.

None of these facts were lost on Bejamin Fulford, a big-time conspiracy theorist based in Japan. He’s not a crank–he was Asia-Pacific bureau chief for Forbes for 7 years–and people I respect take what he writes seriously. He quite easily fit the Tianjin blasts into his narrative arc of global struggle against a small crypto-fascist cabal that controls world finances based on the supremacy of the petrodollar.

In this scenario, the fire was no accident, it was deliberately set, knowing full well that the weak Chinese firefighting response would in all probability precipitate the blasts which would take Tianhe-1 offline. That’s pretty sophisticated thinking, but if you give smart people plenty of time and resources plus clear objectives, is it so far-fetched to plan such an operation? It’s certainly not hard to start a fire, and the area doesn’t seem to be super secure given that there were plenty of residential units in the area, which was one of the big mainstream media criticisms to emerge from the tragedy.

In other conspiracy theory circles, the explosion was caused by a blast from an orbiting U.S. satellite, the so-called “Rod of God”, in retaliation for the currency devaluation. It’s another salvo in the brewing financial/cyberwar between the U.S. and China, one which will be shortly leading to declaration of a new Chinese currency backed by 30,000 tons of gold which will displace the dollar as the world’s reigning currency and shatter the U.S. economy in the process.

But back in this universe, these kinds of industrial explosions are unfortunately pretty common in China. There was another big one at a chemical plant in Shandong just a few days ago. A year ago an automotive plant in Kunshan blew up killing enough people to earn it its own Wikepedia entry. In this scenario, lax safety enforcement and sheer numbers make these kinds of accidents inevitable.

These theories can’t all be right so it boils down to this: what do you consider believable?

Wouldn’t the fact that industrial accidents are so common be the perfect cover for an operation like this? Don’t you think that a Rod of God blast would be detected by numerous space agencies all around the world? Why are the Chinese putting large quantities of highly dangerous chemicals within a kilometer of their supercomputer center? Is there really a cyberwar going on for control of global financial markets? Wouldn’t Tianhe-1′s trade volume have been really easy to spot? At the end of the day does any of this really matter?

The truth is known, but there is no way for you to know the truth, though the truth will be known to you, eventually, long after the knowing has lost significance. That’s no answer and there’s no answer here for you, no catharsis which can be derived from reading this.

In fact, it’s probably best to forget you ever read it.

2 thoughts on “Tianjin Explosions in an Alternate Universe”