Every year for the last three I have run the Shanghai Marathon. Okay the half marathon. And every year I tell myself that this one will be the last. Somehow it never is. In fact this year I enjoyed myself more than ever before even though I ran my slowest time – 2:06. Here are a few postcards from the Shanghai Marathon 2016.

Shanghai is empty – no cars, no people. It’s still dark. In a cab, I hit every green light, making incredible time across the city. As soon I cross the Zhapu Bridge and get on the other side of Suzhou Creek, I am engulfed by chaos – thousands of people going in every direction. The energy is incredible. I dive into the throng and work my way through the security scrum on Beijing Xi Lu. Everyone is looking around for a place to piss. The Peninsula Hotel is a refugee camp. A girl in full body leopard suit – complete with long curly tail – stretches. Two foreigners stop to take her picture.

There’s a ton of noise and nervous excitement before the start of the marathon. Drums are being beaten. The MC shouts relentless encouragement. 38,000 people are running today and I’m somewhere in the middle. People link up and pose for pictures. A helicopter chops at the air above the city. To my left a bunch of people unfurl a huge Mercedes-Benz banner. Someone passes the news that Liu Xiang is the honorary marshal this year. Officials give speeches.

The starter’s pistol fires making a small distinct pop. Everyone lunges forward. Then stops. I don’t get across the starting line until 7:17. Liu Xiang is nowhere to be seen, but I do see the first rays of the sun peeking between the skyscrapers of Pudong. The race has begun. 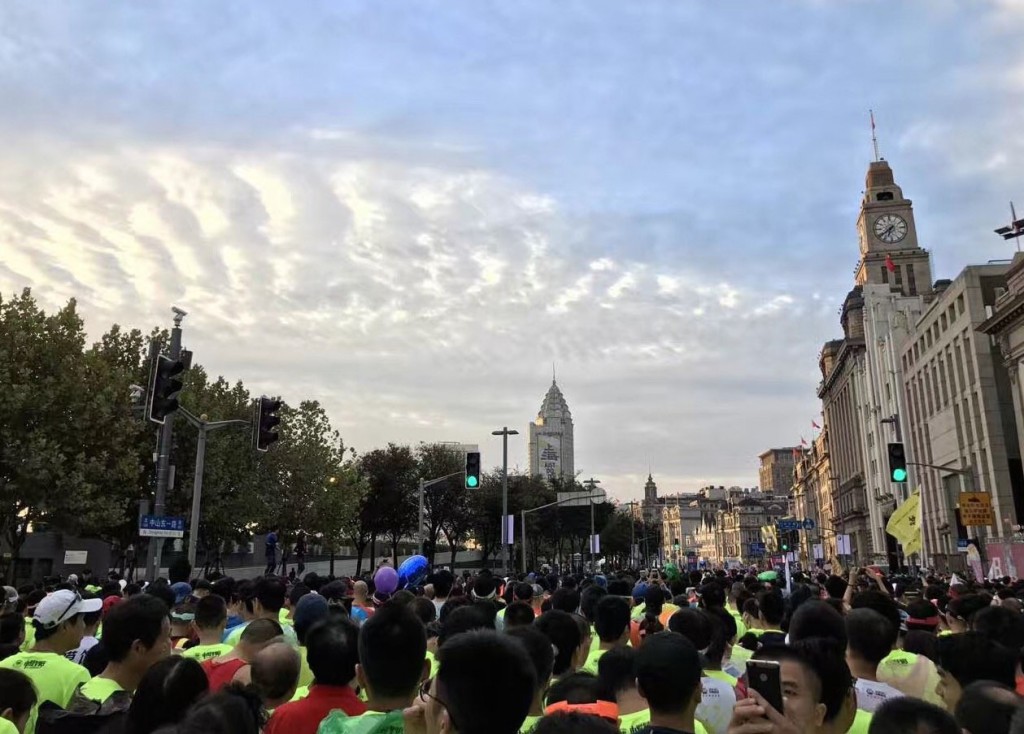 For the first kilometer you’re wading through a sea of trash. Cups, towels, discarded banana peels and those thin plastic rain wraps are all in the process of being pulverized, smashed or torn to shreds.

Arms, feet, elbows, shoulders – that’s the circumference of the world. It’s as if the People’s Square metro station at rush hour suddenly decided to bolt in one direction at the same time.

Things start to open up a little. The crowds lining both sides of the road come into view. That’s one of the best parts. I don’t mean the fancy corporate installations but the randoms like the groups of old ladies all decked out on the same guangchangwu robes beating drums in time and shouting “yundongyuan / jia you!” from halos of frizzy grey hair. 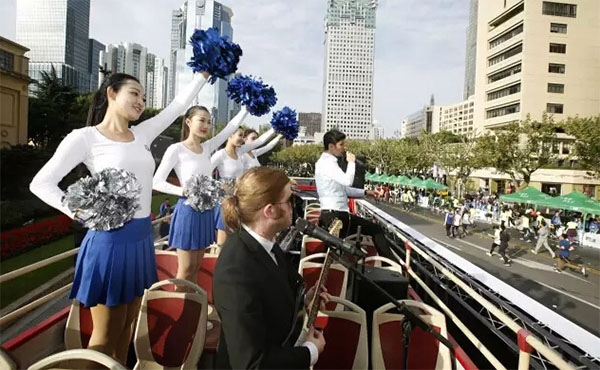 Every marching band in Shanghai has mobilised for the event, with their matching outfits and festive plumes sticking out of their fez-like hats. I pass one playing the Rocky theme song, then another playing the theme song to the Bad News Bears. I feel like I am running downhill.

I pass a middle aged Shanghainese dude with glasses blasting a tune on his portable boom box – one of those popular KTV songs that everyone knows. As runners go past they all join in for a line or two. He’s all by himself just going for it, moving with the music and loving it – a big smile plastered on his face. It’s early morning marathon day and you know he looks forward to this all year.

Around the middle of Nanjing Xi Lu, the plane trees on either side of the road close up overhead signaling entry into the former French Concession. I see a runner dressed as The Monkey King complete with two huge ostrich feathers sticking up from his head. Further on there’s a Taoist monk in full robe and with a little brimless cap on his head. He even carried a woven basket on his back containing a few sprigs of flowers. Beyond him there’s a runner dressed in an terrifying anatomically-correct skinless full bodysuit including head. How does he breathe in that thing? 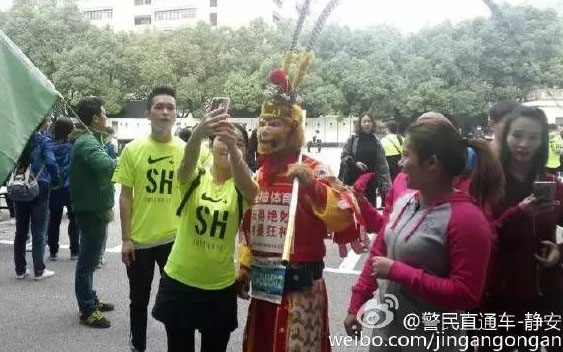 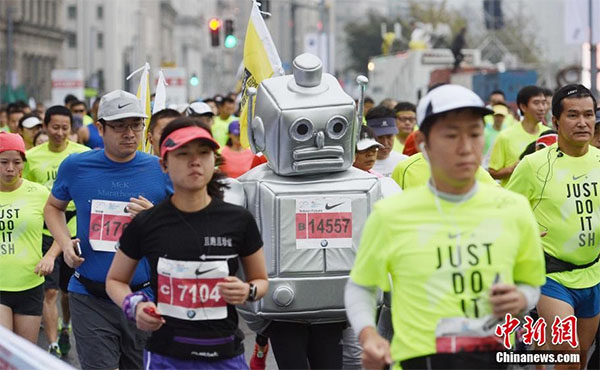 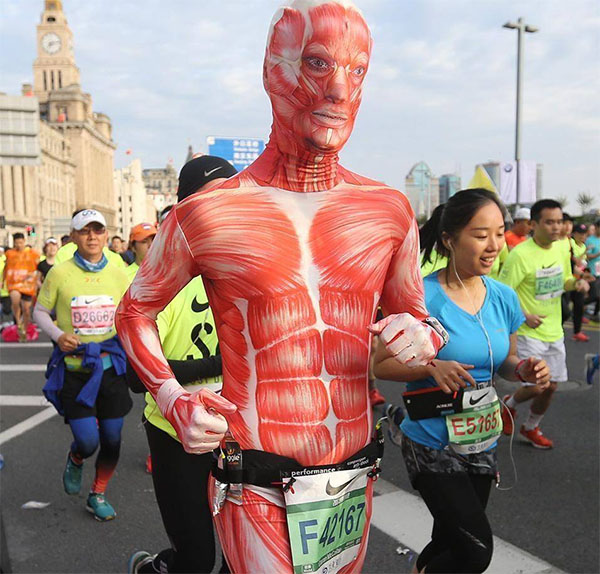 The race passes Jing’an Temple – where are the monks? Surely there should be monks on the sidelines chanting sutras and handing out cups of water. This lack of monks needs to be addressed by the organizing committee.

Down Changshu Lu past the girly bars across from the Hilton Hotel. A working girl in high heels walks unsteadily on the arm of some slick beast. The last casualties of the night, blinking in the light of a new day, surprised to find half of Shanghai running past them.

I’m reading people’s T-shirts to pass the time. Most of them are from other marathons or bland messages of encouragement, except this one which reads:

We turn south on Xizang Lu and begin the long slog south into parts of the city no one goes. The marathon route splits off. It gets quiet, people are getting tired.  All you hear for a few kilometres is the trample of feet on pavement.

Everything becomes a blur. You look up occasionally to see a patch of blue sky over white walls which surround you on both sides. Nothing looks familiar. Kilometer markers come farther and farther apart – 15…16…17…Somehow 18 never seems to arrive.

I tell myself I am resting, at home, in an armchair. I try very hard to convince myself of that. I tell myself that at kilometer 19 i will get out of the armchair. At least my legs feel okay, even my knees. No hint of that debilitating pain that usually crops up late in a race.

I see the “19” marker and I start to run fast, passing people, blasting by, leaving them in the dust, in a way I’ve never been able to do before, not this late in a race.

The venerable edifice of the Longhua Temple pagoda appears on my right. We’re near to the end. A big thrilling cheer erupts from the crowd. The African marathoners fly past on the other side of the road, two of them, neck and neck. Not many other sports do amateurs get to play alongside the pros on the same course at the same time.

We make the turn into the Shanghai Stadium grounds. The route winds through the packed crowds and passes through a gap into the stadium itself where we cross the finish line in front of a million invisible fans. Joy and relief are palpable.

I finish in just over two hours – a few minutes slower than last year. Never mind. It’s not the finishing that counts, but the starting. In the end what I love about the marathon, what keeps me coming back despite all the hassles, is the unique feeling of owning the streets of Shanghai. For once, everyone has to stop for us – bikes, people, cars, everything. For a little over two hours, the city is ours. 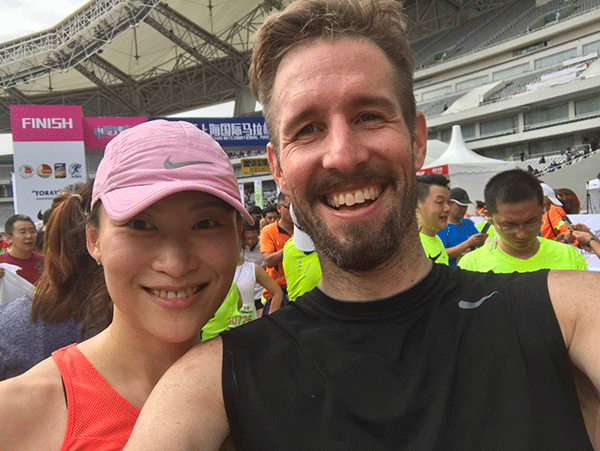