I’ve always thought of Tokyo as impenetrable in some way. Maybe because of the language barrier, maybe due to scare stories of the impossible-to-navigate Tokyo subway, maybe because of its reputation for being frightfully expensive. But really it’s one of the most sophisticated places in the world, a ton of fun, and–most interestingly–almost always perfectly soundtracked. 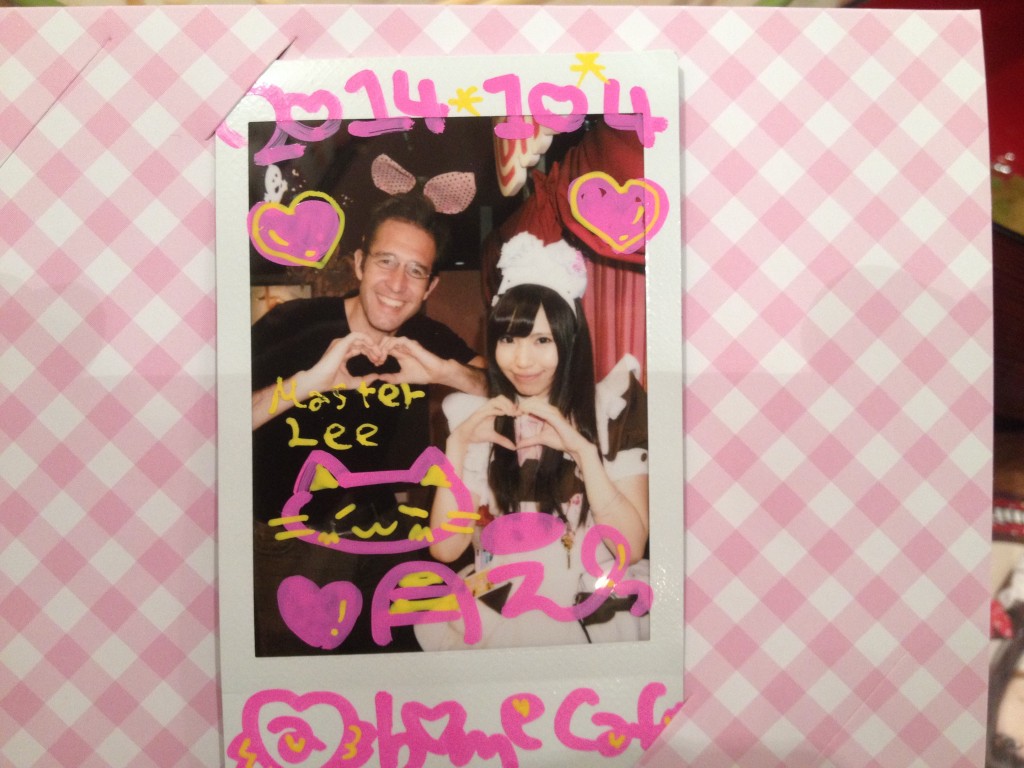 Actually I chose to base myself in west Tokyo because I wanted to be able to make a quick break out of town on my bike via Highway 1–the old Tokaido Road–which I planned to ride all the way to Kyoto, rather than any deep insights into current Tokyo dynamics. It turned out to be the right choice.

We got an Airbnb apartment in Shibuya, a couple blocks from the Shibuya metro stop and a couple blocks from the Excel Hotel which is where the Friendly Airport Limousine (the airport bus basically) drops off. The apartment is in the Dōgenzaka neighborhood, at the foot of Love Hotel Hill. You’ll find a pretty decent nightlife scene there including an “herbalist” who sells synthetic marijuana 24 hours a day. 1,200 yen gets you 0.5 grams of the stuff which is enough for three joints. I’m told.

I can’t recommend synthetic marijuana, you have no idea what you are getting. But it’s quite big in Japan and probably around the world. I was told by someone that these herbalists are on their 8th iteration of the formula which is modified to stay one step ahead of the regulations.

Shibuya, I discovered, is pretty hip. It has more character than Shinjuku and draws an older crowd than Harajuku. Harajuku is a head trip–an amazing place in its own right–while Shinjuku has some outstanding restaurants and, of course, the Golden Gai. I knew none of this before I landed, however, as I’d spent all my time prepping for the bike part of the trip.

Harajuku is the place to shop for Halloween. Wherever you are in the world, you should fly to Tokyo and subway to Harajuku to do your Halloween shopping. One store sold extremely ornate women’s costumes. The proprietor was a mincing gay man who looked at me with disapproval as I moved between narrow racks overflowing with sequined miniskirts and studded corsets. 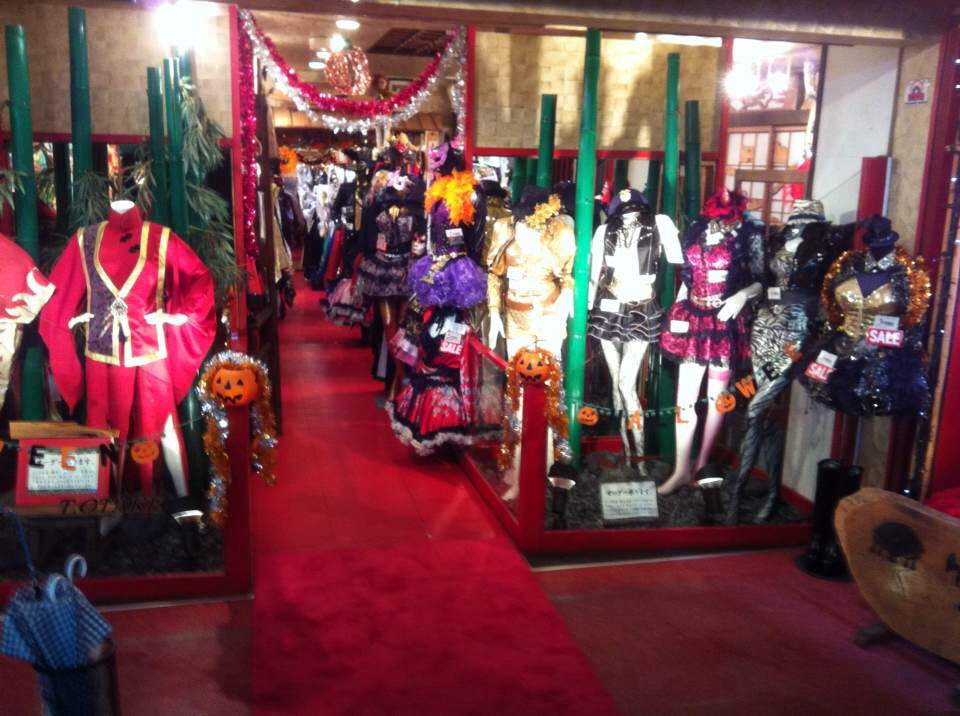 Another store a few doors down was devoted to all things goth and metal. The proprietor, a 70-year-old bald Japanese metalhead, wore a Motley Crue T-shirt. He didn’t mind when I tried on the expertly tailored Matrix trench coat or the full Victorian tailed coat with matching ruff. Even though it was Sunday, we didn’t see the famous cosplay kids because it poured down rain.

Anyway, Golden Gai–an extremely interesting area of alleyways crammed with niche sake and whiskey bars. It was introduced to me by a random guy I met in a conveyor belt sushi restaurant in Shibuya. It’s definitely one of the coolest places in the world. Each bar has only 4-8 seats. Many of them are accessible only by a narrow and steep set of stairs. 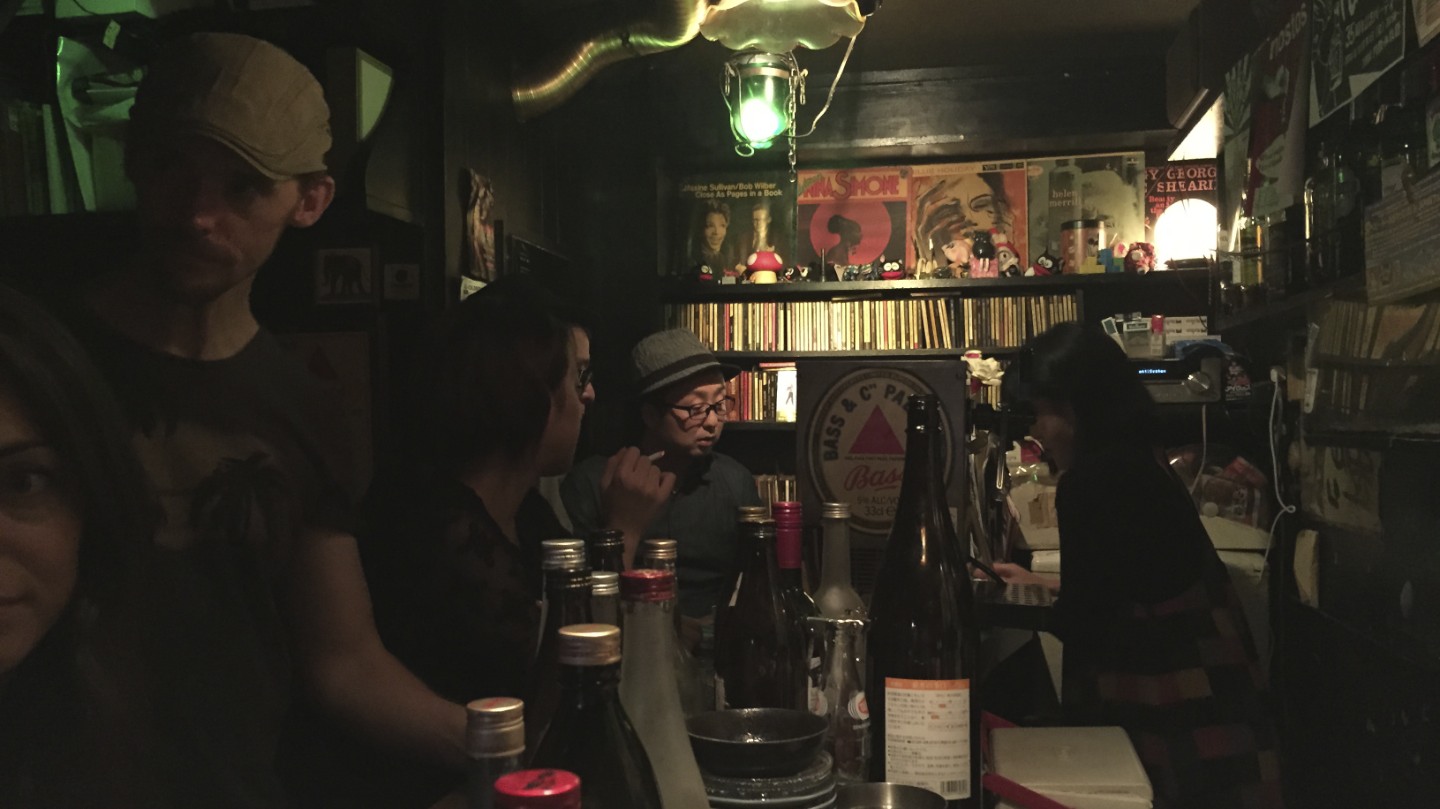 We walked the alleys checking them out before crowding into one which had a few extra seats. We ended up meeting a foreigner who spoke fluent Japanese and his Filipino girlfriend. The foreigner had an impossibly large Canon EOS camera set on the bar before him. We all fell to talking about random things. He told us he’d been born in Hong Kong and recently thrown over a job with Apple. The bar manageress told us that the Golden Gai had been around since after World War II and was originally a kind of red light district. Later, a Japanese friend told me it was originally a ghetto for Taiwanese and Chinese. It was probably both.

The beauty of the Golden Gai is that you simply cannot avoid falling into conversations with random people and maybe even becoming Wechat friends, if not actual friends. We stayed there late drinking sake, before moving to plum wine, listening to scratchy old blues albums. We also tried to buy iPhone 6s, but were unsuccessful, not merely because we were drunk and could not read Japanese.

The day after arriving we made a specific trip to the Shibuya Apple store to see about buying iPhones which, we figure, are going to be about rmb1,500 cheaper than in Mainland China. The way it works is that you have to “book” your iPhone the same day, which means that just after midnight a bunch of people are online trying to reserve. If you are successful, they will tell you exactly when to go to the apple store to pick up your prize. We were not. We were told all this by the floor manager, a red headed foreigner who spoke excellent Japanese who was also an avid cyclist and had formerly been the concierge at the Intercontinental Tokyo.

We went to one club–Sound Vision Museum–within two blocks of the apartment. It cost 3,500 yen to get in (about 200 kuai) and included a beer served in a pathetically small cocktail glass. Chris Lake came on right when we got there and threw some hard techno. Tokyo loves its hard techno. My Japanese friend who has been throwing EDM parties in China for a decade told me that the club scene was dead in Tokyo. I won’t disagree, though I will say that foreign name DJs won’t just phone it on when they play a Tokyo club. 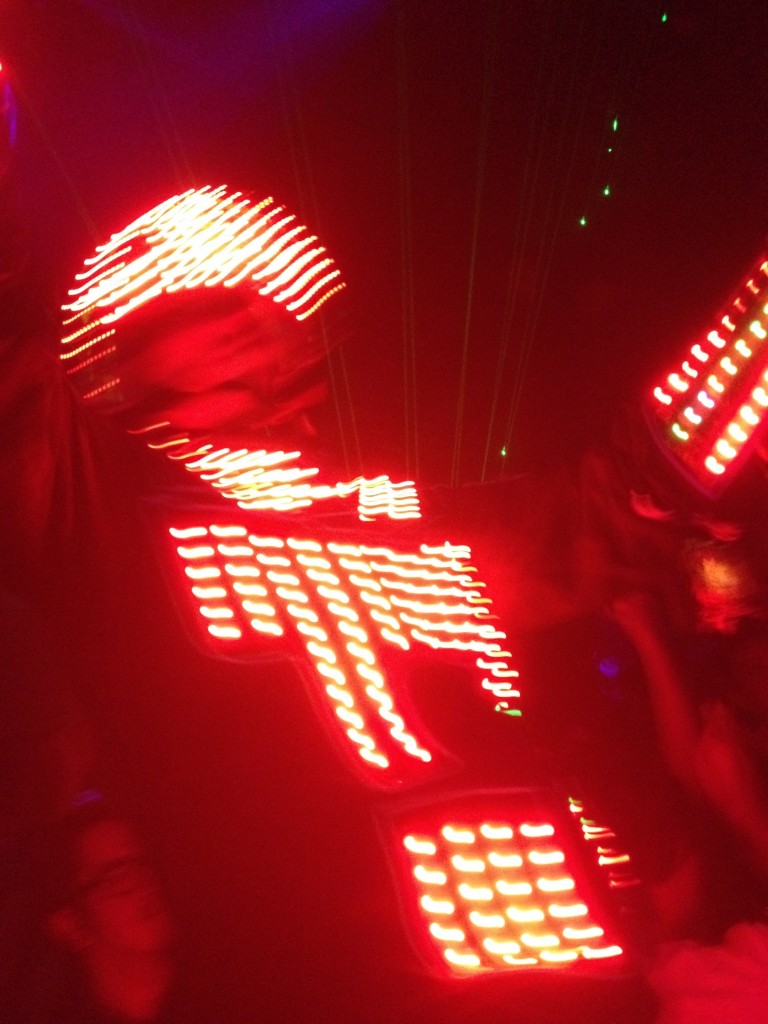 One of my favorite moments in Tokyo was sitting in Sunday Coffee, a cafe a block from the apartment. They specialize in Kona coffee, which comes from Hawaii. But they also sell bottles of cold Kona Long Board brand beer for about RMB40 apiece. Next door a restaurant had a pair of miniature dairy cow sculptures out front. Down a few more doors was a restaurant with a Chucky doll in the window and a sign reading “Eat Here!” I later walked past it and heard the sounds of chill reggae music coming from inside.

In Shibuya we made a few noteworthy discoveries. First was Mandarake–one of the largest manga shops in all of Tokyo–whose motto is “Rulers of Time”. You have to walk down about 4 flights of stairs to get to it. It’s got everything from classics to contemporary in print and DVD. 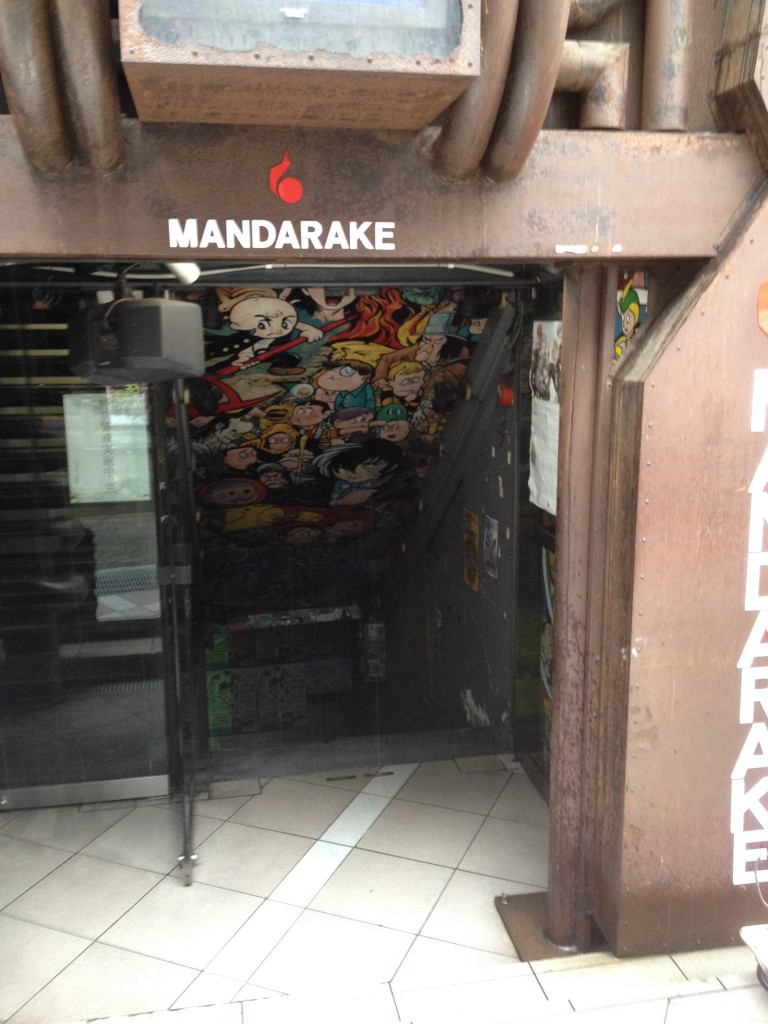 Then there is Village Vanguard. To describe it as a purveyor of kitsch is a disservice. It, too, is underground, and also has some manga stuff, but carries much more, most of it readily identifiable but as a whole it’s totally unclassifiable. It might once have been a comic shop, like Newbury Comics in Harvard Square, but now has a ton of weird stuff, only a little bit of it perverted.

There is, of course, a ton of perversion in Tokyo. That’s certainly part of the charm of the place. Akihabara–the place famous for otaku–is a whole neighborhood of retail catering to perversion. And everywhere in Tokyo you will see DVD shops advertised which are almost always in the basement or on upper floors. One of these we went in to see what was what.

On the strength of that shelf, I asked the guy behind the counter if he had any Kore-eda movies. He smiled and handed me a laminated sheet on which was written in English:

Emerging from Village Vanguard, we noticed that the stairs actually went down further, into darkness. So of course we followed. A white skull out of nowhere leaped into life like some crazy haunted house. Down several more flights of stairs, greeted by similar fake demons on motion detectors. We finally reached a vestibule curtained off by a velvet drape. A Japanese girl took one look at us and disappeared behind the drape. Moments later a foreign girl appeared. It was a bar, she explained, prison themed, called Lock-up. 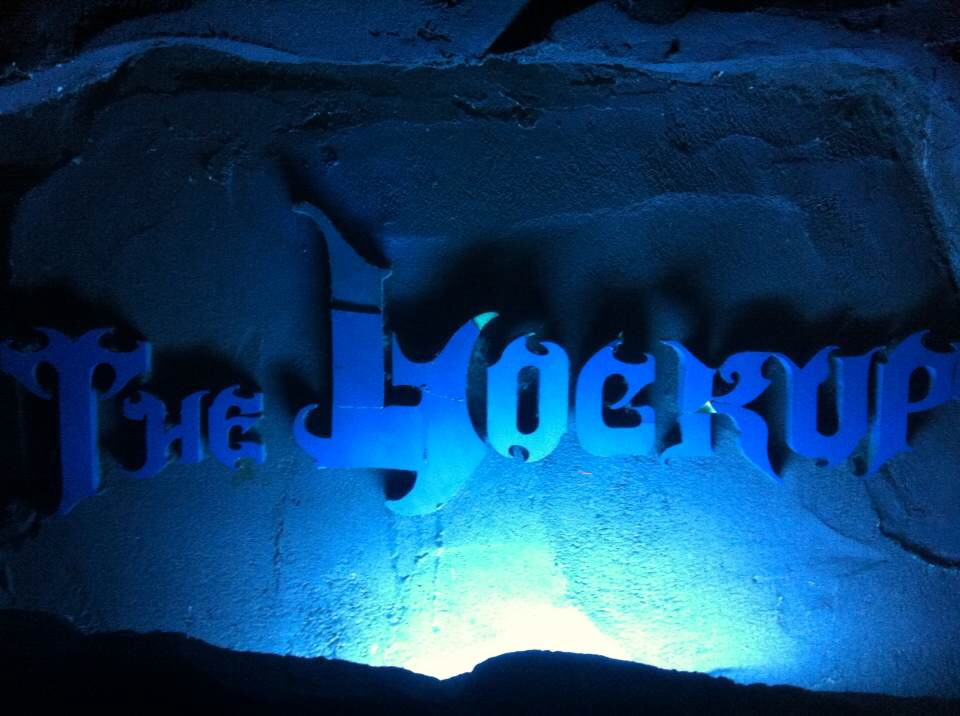 Back on the surface we noticed a sign to this effect. But so much better to discover it for ourselves though. And this is the crazy thing about Tokyo. Stuff you find on street level is never going to be as good as the stuff you find down a few flights of stairs or up a few flights of stairs or through an unmarked doorway. Maybe it’s all self-evident if you read Japanese, but somehow I doubt it. You just have to try stuff and find out.

For example, the last night in Shibuya. I’d met up with Vorodo Bocada who recently gave up on life in Beijing and moved to Tokyo. On Love Hotel Hill, we looked for a place to drink. I’d passed a bar a few times which I thought looked interesting. We went in, took seats at the bar and began to chat with the bartender who spoke fluent English having lived in Portland for awhile.

At some point a couple girls came in, a foreigner and a Japanese girl. The foreigner put down on the bar an inflatable mallet and then immediately poured herself a beer. She told us a crazy story of skipping out on a huge onsen bill on Tokyo island and then taking a cab ride all the way to Shibuya, which they also did not pay for because they had no money to pay for it. 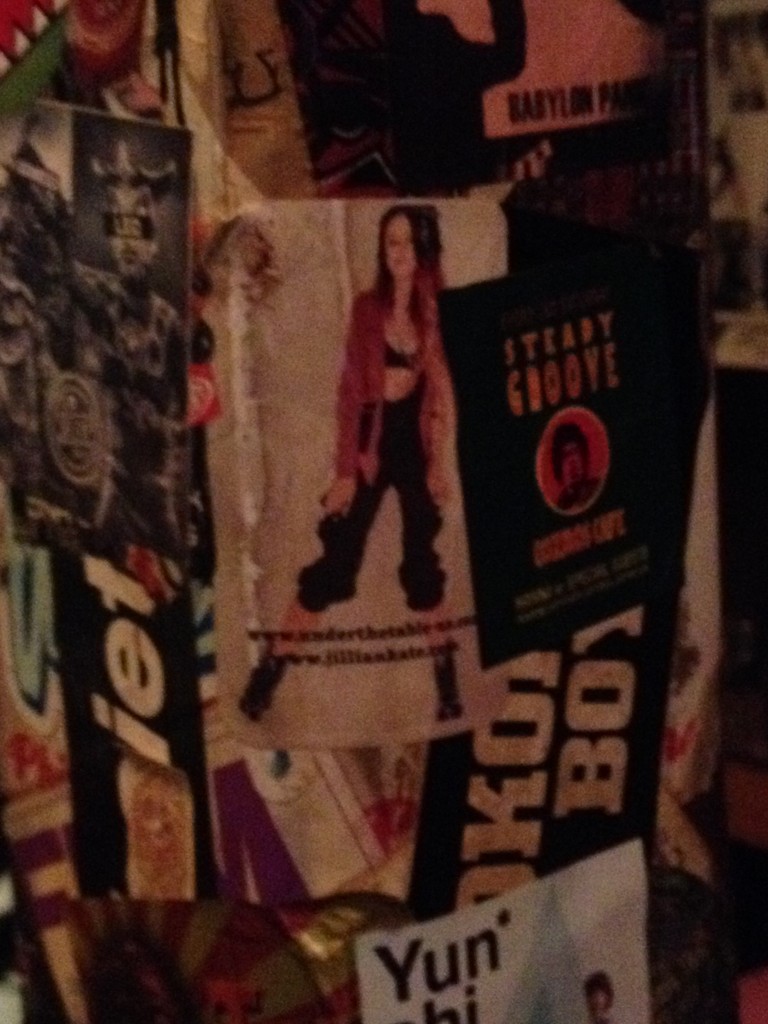 She was a complete doppelgänger for a girl I knew quite well in Beijing before the Olympics–a force of nature, sometimes a natural disaster.  Her friend the Japanese girl started talking to me and before long had a hand on my leg. But the night was over for me. The typhoon was coming and we needed to make Mt. Fuji the next day. I told her I had to go.

She looked disappointed, puzzled. I explained: “My gay lover is home in bed sick. I must go take care of him.” “OHMYGOD” said the doppelgänger, “you’re hitting on a gay guy!” I shrugged and left, sliding back the glass doors and leaving into the pouring rain.

If this is the result of Japan’s slow decay from its ’80s/’90s heyday then I am all for it. Somehow, the economics of a prison-themed bar 4 floors underground work. Somehow the economics of a 6-seat bar surrounded by a thousand other 6-seat bars works. In China it never could.

And, somehow, every place every moment comes with the perfect soundtrack.

Leave a Reply to from your Pop Cancel reply