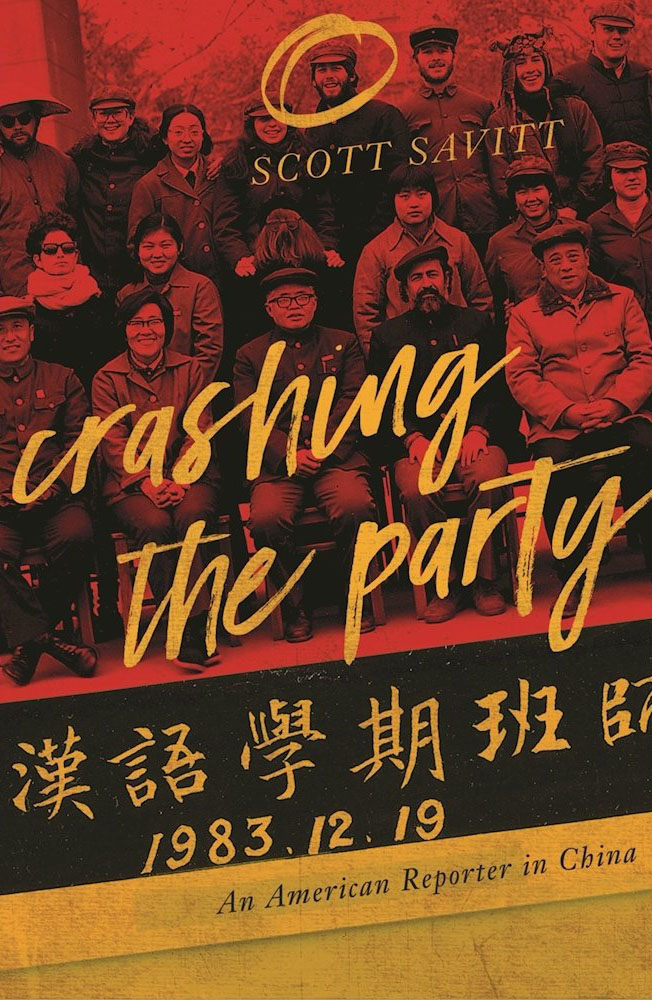 It’s not because the book is bad. Quite the opposite – it’s actually pretty great, fast-paced and energetic. Some parts read like a thriller with seriously pulse-pounding action. It covers 17 years – 1983 to 2000 – in less than 300 pages.

And it’s certainly not for lack of historical significance. Savitt was witness to and participant in post-Cultural Revolution China’s most important events – the birth of Chinese rock ’n’ roll, the emergence of the Yuanmingyuan Artist Colony, the arrival of the internet, Tiananmen Square – the whole sweep of gaige kaifang essentially. He also hung with heavies like Cui Jian, the playwright Cao Yu, Nobel Peace Prize winner Liu Xiaobo and former U.S. ambassador Winston Lord to name but a few. He even rode in a limo with Nixon for a day.

In fact I can’t see why his book isn’t getting more attention. Maybe he pissed off the wrong people. Who knows? Anyway, it’s solid. More than solid. I rate it right up there with Simon Leys’ Chinese Shadows, Theroux’s Iron Rooster, Jean Pasqualini’s Prisoner of Mao and Hessler’s River Town as one of the best post-Liberation China memoirs.

The book starts out with a punch in the gut – Savitt laying on the floor of a Chinese prison – before whipping back to his first day in Beijing as a foreign student in 1983. By chapter 4, death makes its first appearance and you know this isn’t going to be a “Do you know how to use chopsticks?” fish-out-of-water farce.

The events of Tiananmen Square take up the biggest chunk of the book. It’s been covered well many times before, but Savitt takes us to places no other writers ever have before. He was out in the streets the night shit got real – not just the streets, but west Beijing where the bulk of the killing took place. He saw the bodies. They fell around him. He had rifles pointed at him, “but” he writes, “for some reason they didn’t shoot.”

Sandwiched around that you get the bildungsroman of a young man’s rise to something like fame and his eventual downfall. Along the way he becomes the youngest accredited foreign correspondent in China, sets up an internet business and launches now legendary Beijing Scene magazine. But it all comes crashing down in the summer of 2000 as he’s frogmarched onto a United Airlines flight to San Francisco in handcuffs, never to return. We never really find out why.

Maybe that’s why he hasn’t gotten the attention. Grapple with his story and you have to grapple with just how unfashionable the whole human rights thing has become. We used to care so much about it – Westerners and Chinese alike. Where the hell did all that go? Was it just a fad after all like friendship beads and Pokemon Go? Even this guy’s story which made the rounds this month failed to move the needle much.

For expats, of course, the book offers an invaluable window into Beijing of the ’80s and ‘90s. His recollection of the Cui Jian headlining the Halloween bash at Maxim’s is a classic example. I used to cycle past that shithole in Chongwenmen shaking my head and thinking, “How could that have ever been the coolest place in Beijing?” Now we know.

I wish the book had more of that – ambiance I guess you would call it. But then the book would have been 2 or 3 times as long. Which would have been fine with me. I mean seriously, Proust published 10,000 pages of nothing much happening. Savitt’s memoir could easily have been split up into several volumes, each with a different flavour. But what it lacks in background detail it makes up for with a surfeit of action. Maybe it is a curse to live in interesting times after all.

And that’s the thing for people who, like me, came to China a bit later. The days are long gone when you could walk down the street and end up starring in a TV show, or show up at English corner and meet the cultural vanguard. It just doesn’t work like that anymore.

The times still are interesting, of course, but now you have to make an effort. You have to spend the time and be open. You have to observe closely and dig beneath the surface. If China has succeeded in anything in the last two decades, it’s wrapping everyone in a comfortable illusion of normalcy. But along the edges of that, battles still rage. And they aren’t just battles of the mind.

2 thoughts on “[Book Review] Crashing the Party: an American Reporter in China”