Sometime in 2016 Shanghai Disneyland will open to the public–Mickey, Minnie and the largest Enchanted Storybook Castle in the world. By now everyone in Shanghai has been touched by Disney in some way. Either you know someone who works for it, overheard someone talking about it, made a bit of money on land speculation around it, or all three. It’s also got symbolic meaning as a perpetuation of Expo, a permanent fictive happiness walling off Shanghai from the crises multiplying across the mainland. So on Saturday, under gorgeous blue skies, I set out on bike to find the Middle Kingdom’s Magic Kingdom. Not only did I find it, but I infiltrated it. I got as close to the Enchanted Castle as any non-Disney employee has gotten.

For being that big, Shanghai Disney is not that easy to find. It took me two tries. A former colleague, who now works at Disney, told me it’s out in Chuansha. That’s not exactly true. It’s actually in Liuzao Zhen, just south of old Chuansha watertown. If you whip north up the Hulu Expressway (the S2) from the S32 you’ll see it flash by out your right-hand window. There are big expressways on two sides and a man-made moat on the other two sides walling it off from the public. You access the interior of the park via one of the handful of bridges which cross the moat. Security checkpoints sit at the head of these bridges.

But we saw plenty of people entering and exiting the park–all workmen. My riding partner suggested we give a hundred kuai to a couple of workers, borrow their clothes, disguise ourselves and slip into the park. Turns out we didn’t even need to do that. Across from the main entrance of the park there is a village and in the village, topped by a large yellow sign, is a shop selling–you guessed it–worker’s clothes: hard hats, bright yellow neon safety vests, blue canvas shirts, the works. So for less than RMB50 we equipped ourselves with hardhats and reflective vests and passed under the “Shanghai International Tourism and Resort Zone” sign completely unremarked by security, crossed the bridge and entered the park where we pedaled around for a couple of hours seeing what’s what.

Here are the photos: 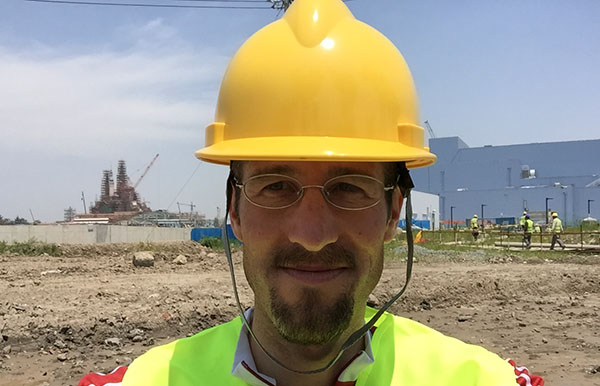 Enchanted Storybook Castle in background. You can see a few legit workers over my left shoulder. 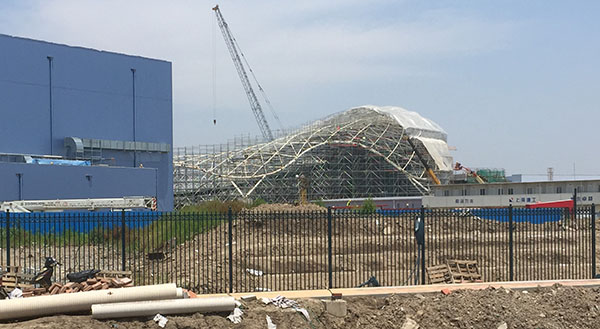 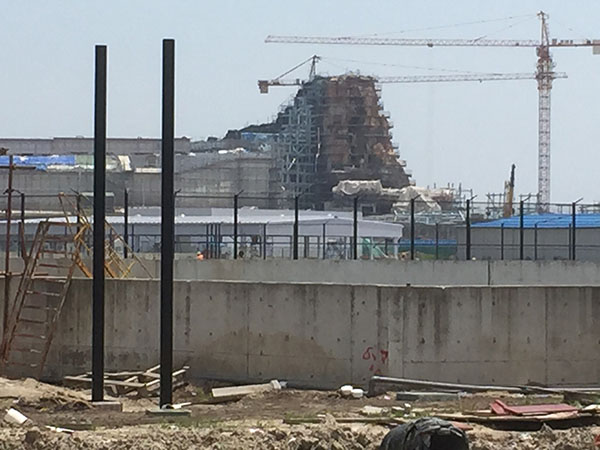 Some sort of half finished mountain thing 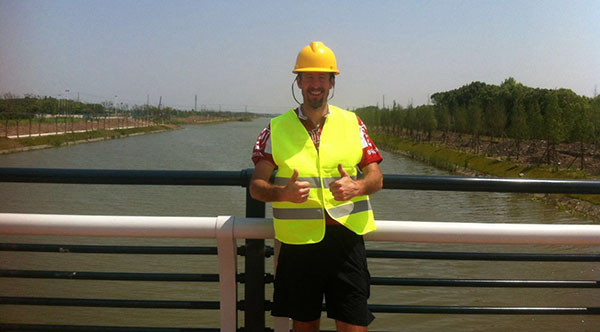 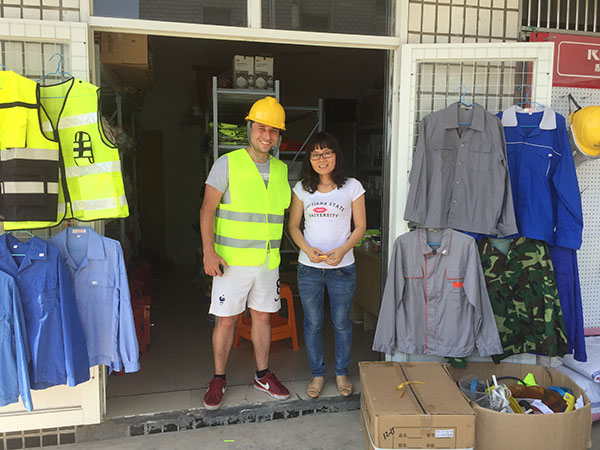 Disney Shanghai is only the beginning, of course. Universal Studios is said to be opening something around Beijing in 2019 and Six Flags is eyeing Tianjin in 2018. And you know there will be tons of Chinese knock-off theme parks, vying hard for the tier 2 RMB.

There’s something depressing about seeing Disney up close, without her makeup on, like a great old drag queen backstage without falsies and wig–not so magical, especially for an American who visited the Orlando Disney at age 5 and grew up loving Mr Toad, the Mad Hatter, Space Mountain, and the Haunted Mansion. Here, it’s just another gongdi.

These kinds of theme parks are perfect for China–fun is fenced in, delimited into zones and opening hours and available attractions. There’s a ticket price and a ticket window and a ticket taker and a security guard who specializes in the phrase “bu xing”. There will be long lines which VIPs won’t need to stand in.

For Shanghai, it’s the perfect post-Expo hangover cure. It’s perpetual Expo. It’ll be packed and everyone will love it. They will have to because they will have no choice. There will be special price packages for families. No spitting or smoking or pissing in public will be allowed–but it will happen anyway. The moat will fill with trash and pollution. They will add a phase 2 and a phase 3 and a phase 20 and it will swallow Pudong. Eventually we will all live inside Disneyland, paying rent to Mickey Mouse. Visas will be handed out by Donald Duck.

From this patch of turned dirt, Shanghai’s future will rise.