I haven’t thought of Hedy Lee in years. But in the last month she has made a comeback – among certain circles at least – courtesy of this thread on Reddit. It begins with indignation over a magazine article she wrote in 2009 giving advice for managing ayis before devolving to the question whether or not she was a fiction perpetrated by City Weekend. It’s an absurd question. A simple Google search shows you she is a real. The real question is – what to make of her? 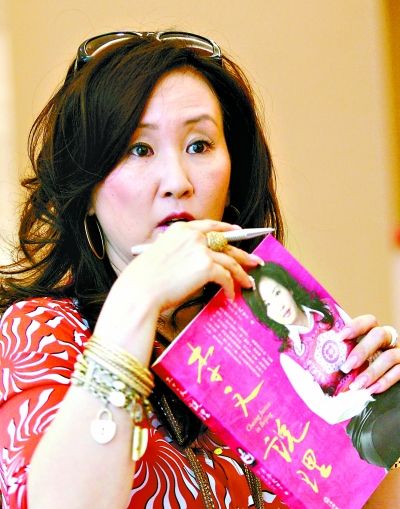 I was introduced to Hedy Lee at a media event in 2007 by the owner of a short-lived nightclub – Arena – in the basement of The Place shopping centre. After the event we split a cab and on the way she introduced me to the fact her father was Li Ao.

Now this name means nothing to most people, but anyone who has done China studies knows he’s a famous Taiwanese intellectual, writer and political figure with the unique reputation of being against pretty much everybody – Kuomintang, DPP and CPC. He spent several years in jail under the Chiang Kai-shek regime, has run for president of Taiwan, and was barred from entering mainland China for many years. The best term to describe him is “political gadfly.”

Hedy is no less of a gadfly, but in quite a different realm – manners. Her public spats with everyone from big Chinese property developers to the Hyatt Hotel group to Alibaba have been well detailed in the media. Many of them ended up in court. She even wrote a book about them, “Like Father, Like Daughter.” Hedy sent me a copy of it the week after we met.

A great many of her complaints are against property management companies at the various compounds she has lived in. Here is a small sampling.

“Lee could not tolerate her neighbor’s children who often played on the public passageways.”

“[Lee's] gripes ranged from noise, poor facilities, flyposting in the mail box, taxi drivers’ spitting and her neighbor’s habit of hanging out the washing and other clothing in the sun.”

“Some insects from the vegetable garden also violated Lee’s hopes of a quiet life.”

Pretty pedestrian stuff all in all. But that was her thing – the daily hassles of life in China – a battlefield to her even more contentious than her father’s. She used to carry around in a sheaf of plastic a photocopy of the Beijing Department of Health regulations governing the new indoor smoking issued in the run-up to the Olympics. She would whip it out in Beijing’s classiest establishments and wave it at anyone who made a move to light up in her vicinity including high-rollers unaccustomed to being told “no.” More often than not, she got her way.

And isn’t that the secret expat fantasy – to strike back at the people who annoy us, to teach them a lesson once and for all? How many times have you wanted to go on a violent rampage because of construction work at 7am? How many times have you flipped out because some slob in an Audi nearly ran you over crossing the street while you had the light? Probably not just once. Hedy has made a career out it.

Nevertheless, there is something laughable about making a career out of griping about bad manners, especially in China. If you or me tried that, we wouldn’t get anywhere.

Hedy gets away with it because she’s rich and well connected, but also because Chinese people listen to her. Part of that is because she is ethnically Chinese, part of it because she’s a woman (there is a long, honourable tradition of maternalistic haranguing in China), but part of it is because she harbors no real hatred against the people she targets. She may talk down to them, but it’s delivered in a way that allows them to save face. People respond to her.

I saw it play out many times. She would launch into a tirade against a fuwuyuan or the fuwuyuan’s manager and by the end of it they would be all smiles and congratulating each other. That’s something I could never figure out.

But then there are those City Weekend articles. How to make sense of them? They really touched a nerve. I have to take responsibility for that. I commissioned her to write them. We had just done some sort of redesign and were running this new insert thing and needed some content to make people give a shit about it. “Hedy’s Rants” was the answer – for three issues at least. In my defense – how many other articles from the expat rags do you remember from last year let alone 2009?

Was she serious about what she wrote in the columns? Definitely. But she’s media savvy and knows what’s controversial. She certainly hasn’t disavowed them. She even lists them on her LinkedIn profile.

Given the benefit of a few years’ hindsight, they’re kind of hilarious. Take this closing of her article “How To Spot Working Girls”:

“If these clues don’t help, then you have no one to blame when you wake up to find your wallet missing or a transvestite next to you. I myself live in the most expensive hotel serviced apartments in Beijing. I once was followed home by a gigolo, as well as a drunk psycho, who secretly passed through hotel and residence security to knock on my door at 4am! So my next article may be how to spot a gigolo, psycho and a transvestite.”

A shame we never got to see the sequel to that one. And how about this minor gem, from her review of the new T3 terminal at the Beijing Airport:

“Hedy was also disappointed by the Air China first class lounge, noting that it used mostly domestic products in the bathrooms, was over perfumed and had three private rooms which looked like something you’d find in a KTV.”

Or these bizarre tips from her apartment hunting article:

“Look up at the balconies for ads, hanging underwear, neon lights and birdcages.”

“Do not get an apartment with China Unicom ads.”

“Walk around with a camera, tape recorder and notepad to record illegal actions. The offender will usually back down or curse at you. If there is a lawsuit, you will have excellent evidence.”

Or this quote from the famous ayi article:

“Sticky fingers are the ultimate sin.”

You can’t make this stuff up.

I got to know Hedy reasonably well during those years that bookended the Olympics. We saw each other regularly until we had a falling out in early 2010 – can’t remember over what. I guess I was tired of being Sancho Panza to her Don Quixote. We haven’t spoken since. Is she an awful person? No. Just self-centered and misguided. One wishes her indefatigable sense of injustice was applied in defense of those without hope of justice rather than the merely elite. But really who among us can seriously claim to be doing that?

Some people contend she is a colonialist or racist. I wouldn’t know about that. She liked hip-hop music and was a regular at Vic’s, if that helps. In any event, love her or hate her, Hedy is a Beijing legend, the kind of character you just don’t stumble across in China anymore.

One thought on “The Legend of Hedy Lee”